This is my letter in reply to Al Sammartino’s letter to the editor of the Home Town News questioning the accuracy of my recent column, “Don’t Pay for Nitrogen in Your Tires” which ran in the March 2nd newspaper.

Thanks for your letter which raises some good questions. I will address the specific points made by you, but rather than turn this into a boring scientific, academic debate, I also have an interesting proposal for you. You and I will each fork over $10,000 to be held in escrow by an independent third party. We will select an impartial, qualified tester of tires like the American Automobile Association or the New England Technical Institute. We will ask this organization, using scientific method, to determine whether or not nitrogen filled tires cause a car to get better gas mileage and longer tire wear than tires filled with air. If the results are that nitrogen filled tires are proven to give statistically significant better gas mileage and wear, my escrow check will be donated to your favorite charity. If not, my favorite charity is the Salvation Army. Please call me on my cell phone, 561 358-1474 so that we can get started. It’s a win-win. Money goes to charity either way and one of us is going to learn something he didn’t know.

Before I address the points you made in your letter, I think it is only fair that the readers of my column and your letter know that you and I have met before. I was surprised that you didn’t mention that in your letter. I know that you will recall that the company owned by you, Coastal Automotive Equipment Sales, Inc. was an unsuccessful bidder three years ago when I was buying $250,000 worth of hydraulic lifts for my new service department. I only mention this in the interests of complete disclosure to our readers.

The first point I will address are your words “I’m not sure where Earl got his pricing”. This refers to my statement that car dealers were charging as much as $199 for nitrogen in four tires. I am enclosing a picture of a price sticker showing a $199 price from a dealer who may well be one of your nitrogen customers. 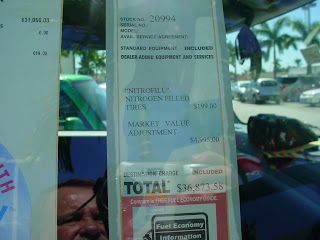 Some of your statements about nitrogen are accurate. Nitrogen does expand less than air, very slightly less. The coeffient of expansion of nitrogen is about 20% less than that of air, but, of course air is 78% nitrogen. It is also true that filling a tire with nitrogen will reduce the amount of humidity inside the tire. Nitrogen molecules are larger than Oxygen molecules and will take longer to permeate the tire wall, but, as you know, 78% of air is already made of nitrogen. What all of your points citing the superiority of nitrogen don’t mention is that because air is already mainly nitrogen, the differences are so slight they can’t even be measured. As I said in my column, I tested tires nitrogen and with air in my rental fleet for many weeks and there was no measurable difference in inflation.

A good analogy to using nitrogen in your tires is those Olympic swimmers that shave their entire body with the hope of cutting off one one-hundredth of a second in a 200 meter race. I can see why NASCAR uses nitrogen in tires. Their cars run over 200 mph at extremely high temperatures and winners are measured in hundredths of seconds. A lot of people put nitrogen in their tires because they like to believe it helps, but I challenge anybody to show me a valid, scientific, independent study that proves nitrogen improves gas mileage or tire wear.

I don’t have a problem with you selling nitrogen to someone for a low price. My wife and I take a lot of vitamins and herbs that have never been proven to improve our health by medical science, but we are careful not to take any that can be harmful. We look at it this way. It might help, it can’t hurt, and the vitamins are cheap. The only thing that nitrogen can harm is the pocket book of the buyer and $199 for four tires filled with a gas that has never been proven to help gas mileage or tire wear is insane.