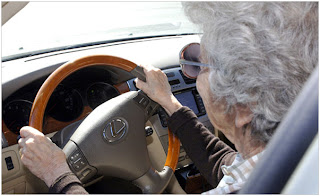 This is the third time I've run this article which originally ran five years ago. I ran it again last year, but it’s so important that I’m repeating it for the third time. The original title was “Car Dealers Exploiting the Elderly”. I’m doing for several reasons. First and foremost is that this problem is deadly serious and getting worse. The number of calls I get from elderly victims is increasing exponentially. There are many new readers to my blog and my Hometown News column who have not read either of my first two articles. And finally, the Associated Press recently issued a release, “Scams on elderly lucrative, rarely reported”.

The AP news release begins “Boomers beware: Scams, frauds and other financial exploitations schemes targeting older Americans are a growing multibillion-dollar industry enriching the schemers, anguishing the victims and vexing law enforcement officials who find these crimes among the hardest to investigate and prosecute.” The article goes on to explain that only a fraction of the abuse gets reported, often because victims are too befuddled or embarrassed.  Just last week I was helping female victim in her eighties, a widow who was all alone, having recently lost her son too. She told me that she was too embarrassed to tell any of her friends or the authorities. She asked me not to use her name in my column or on my radio show. I get calls from elderly victims of car dealers weekly and I’m sure that it’s “the tip of the iceberg”. How many more are afraid to call me, just as they are too embarrassed to tell their friends or the authorities.

Last year MetLife estimated the annual loss by victims of elderly abuse at $2.9 Billion. There is no more fertile feeding ground for predators on the elderly than South Florida. A car purchase is the second largest purchase a person makes and what more lucrative target and reward is there than an elderly widow buying a $30,000 new car, perhaps for the first time in her life.

Not a week passes without at least two or three elderly people contacting me about being victimized by a South Florida car dealership. These are usually pre Baby Boomers in their seventies, eighties and nineties. I’m happy to say that I have a high rate of success if I’m contacted soon after the purchase, within a few days. The first thing I do is contact the dealership’s owner. With publically owned dealerships like AutoNation (Maroone), Penske Automotive, and Sonic, and Group One I have to contact the real General Manager. I emphasize “real” because sales managers will often try to foist themselves off as the General Manager, but they are only in charge of the car sales departments and are really “general sales managers”. In the rare occasions I strike out, I have no alternative but to contact the Florida Department of Motor Vehicle, DMV which is the best governmental agency to keep a car dealer on the straight and narrow.

I use the term “car dealer” often in my columns and I want to make it clear that I am not trying to get personal. I could use the terms “car salesman” or “car sales manager”, but the dealer is the boss and I firmly believe the placard Harry Truman had on his desk, “The buck stops here”. The guy that owns the place is responsible for the actions of his employees. Just because he doesn’t know that there are some salesmen or managers taking advantage of his customers, is no excuse.

When I became a senior citizen I truly began to see the world in a different light. I have been a car dealer for over 40 years, but I have seen my own business through the eyes of a senior citizen for only the last few. One thing that has helped this awareness has been my relative new public persona, brought on by my TV commercials. Seeing me on TV (and also reading this column) precipitates a lot of phone calls, emails, and letters from seniors in , Martin, and St. Lucie counties. Some of these are very complimentary. Many of them are also calls for help or advice from those who were taken advantage of when they bought their car.

I get more calls from widows than any other single category. In my dealership last Friday, I was introduced to a widow in her seventies who had come in to buy a car with her nephew. She had never bought a car before. Her husband had always handled this responsibility. He passed away 2 years ago. She was very wise to bring along her nephew to assist her in her first car purchase.

I am learning as I approach 70 that I’m not quite as sharp in some areas as I once was. My memory is not as good and I am not as fast as I used to be. This is not to say that I am not as smart as I was when I was younger. In fact, I’m a lot smarter. There was a great article in the February 16 Wall Street Journal entitled “The Upside of Aging”. It explained how recent scientific studies have proven that even though certain mental abilities like memory and reaction times regress as we age, other more important mental abilities like judgment, empathy, vocabulary, and semantic memory more than offset the negatives. Semantic memory is the recollection of facts and figures from your field of endeavor or hobby and is most robust in seniors. If you would like to read this article just click on www.TheUpsideOfAging.com  or send me your email address or fax number and I will send it to you.

Buying the right car at the right price is no easy task. There are a lot of variables like trade-in allowances, monthly payments, discounts, interest rates, lease or buy, finance or pay cash, and all that I just mentioned has to do only with the cost of the car. What about which is the best make and model for you? This process should take lots of time in the study and preparation but too often purchases are made in just a few hours with little or no preparation.

The reasons why the elderly are so often targeted and exploited by car dealers (and other businesses) are many and complex. For one thing, there are just a lot of elderly people living in , Martin, and St. Lucie Counties. When a reporter asked John Dillinger why he robbed banks, Dillinger replied, “Because that’s where the money is”. Even though most senior citizens are smarter than ever, I believe that we are perceived by many as not being so smart. We are looked upon as easy prey. Also, I think that we pre-baby boomers grew up in a more trusting, family oriented time and we sometimes trust others more than we should.

In summary, if you are a pre-baby boomer like me, take extra precautions before you enter a car dealership. Do your homework carefully. Never, never make a rush decision. Do not buy that car on the same day you come into the dealership. Go home, discuss it with friends and family, and sleep on it. And if you call me, please call me before you buy the car, not after it’s too late.
Posted by Earl Stewart at 11:57 AM