Why Do Some Reporters and Editors Deliberately Misreport the News?

I was very disappointed to read the slanted news article in Sunday’s paper resulting from Palm Beach Post reporter, Bill DiPaolo’s, interview of me last Friday. Mr. DiPaolo called me because he had heard about my efforts to erect the tallest American flag in the World to honor the fallen heroes of 911, the firefighters and policeman who sacrificed their lives to save others.  Below is the letter that I wrote last week to the Lake Park town commissioners:

I am writing you in hopes of getting your support on what I feel is the most important and meaningful endeavor I have ever undertaken. As America winds down a decade of war, I cannot help but feel there is something we should do as a community to honor the sacrifices made by our soldiers and by the first responders of 9/11. I am proposing to erect a monument in our town that will serve this purpose. I intend to install the tallest flag pole in the United States of America and fly what will be the tallest American flag in the entire world on top of it, here, in Lake Park, Florida. I will assume 100% of the cost of its construction, installation, and continued maintenance. The pole will be constructed by a licensed and bonded company that specializes in flag poles of this scale and it will be installed by a local contractor. Once complete, the height will reach three hundred and forty-one feet and will fly an American flag that is sixty feet by thirty feet.

This flag will benefit our town in numerous ways, among which is the draw it will have on visitors to south Florida: it will have very positive impact on local tourism. It will serve as a source of pride in our community, particularly among each of us who were so profoundly affected by the attacks of 9/11 and who call Lake Park their home.

Once installed, I will arrange a dedication ceremony and the monument will be dedicated to the living and fallen first responders of 9/11. This will be tastefully done, as will the continued display of the flag – without the taint of commercialism or hype.

I am asking for your support because I believe this requires people with a vision of the possible to not think that this is “crazy.” I’m used to being called crazy, but I know that credit for my successes in life and business goes to my craziest ideas. I am asking you to believe in this crazy idea. I am asking for a leap of faith.

You can read the PB Post article by clicking on this link, www.PBPostFlagArticle.com. I will also post the article in its entirety at the bottom of this blog post. The headline has changed because I strongly protested it to the PB Post, but it’s already run in last Sunday’s paper and the text of the article remains slanted and inaccurate.

I was disappointed because what DiPaulo reported was not what I told him. After reading my letter above to the Lake Park town commission, you can see there’s no resemblance between that and DiPaolo’s article. My main motivation for erecting this flag is to honor the fallen heroes of 911 and to bring attention to this flag which will be the tallest American flag on the Earth. By bringing attention to the world’s tallest American flag, awareness will also be brought to the USA, Florida, Palm Beach County, the town of Lake Park but most importantly the 422 first responders who died. Yes, of course, it will also bring recognition to me because the flag was my idea, it’s on my property and I paid for it. But to write and headline the article that a “Car dealer seeks towering legacy in flagpole” is maliciously false and libelous. Florida, Palm Beach County, and Lake Park all will benefit by those who travel to our community to see and take pictures of the World’s tallest American flag which is dedicated to honor our fallen 911 heroes.

I did say to DiPaolo that “I would be less than honest if I did not admit that having the world’s tallest American flag flying above my property would bring awareness to me and my business too’. I did not think that he would take that honest admission and make it the focal point of the “news” story.

Isn’t it interesting that nowhere in the article does DiPaolo mention the American flag, only the flagpole? In fact, this is not the tallest flagpole in the world, there are taller flagpoles flying the flags of other countries. I specifically told him that and suggested that he Google tallest flags and flagpoles. He said that he would. He also makes only a slight, passing mention of the fact that I’m dedicating the American flag to the fallen heroes of 911. DiPaulo also brought up the long forgotten feud that I once had with one of the Lake Park town councils many years ago. This had to do with the ire of a very few Lake Park residents and councilman who resented my using the name of North Palm Beach in my marketing. I believe DiPaulo supported that view at that time and decided to resurrect the argument for this article…presumably in an attempt to defeat my request for permission to erect this American flag.

I believe that DiPaolo’s comparing this flag to Donald Trump’s flagpole was a deliberate attempt to make what I’m attempting to do appear to be an ego enhancing marketing stunt which “the Donald” is famous for.

I’ve been interviewed by the press and other media hundreds of times over the years including national and local and most often by the Palm Beach Post. Ninety-nine percent of the time I’m quoted accurately and the story is written honestly. Interestingly, recently there was another false article written about one of my employees by a Palm Beach Post reporter when the reporter falsely attributed my service manager’s favorite quotation to “Malcolm X”, the infamous racist. The editor of both stories was Nick Moschella…sheer coincidence?   I demanded an apology from Moschella then and I never received one. I won’t waste my time asking for one again. You can read the article I wrote about this, “Never Having to Say You’re Sorry if you’re the PB Post”.

Here is the Palm Beach Post article in its entirety: 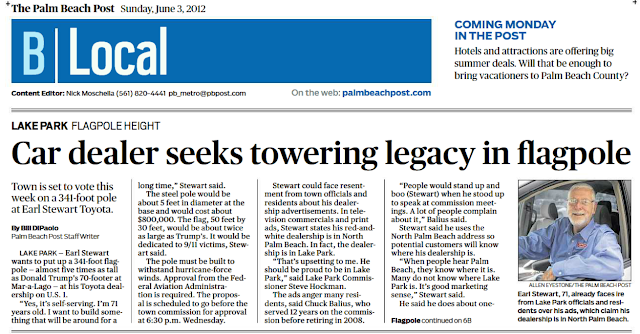 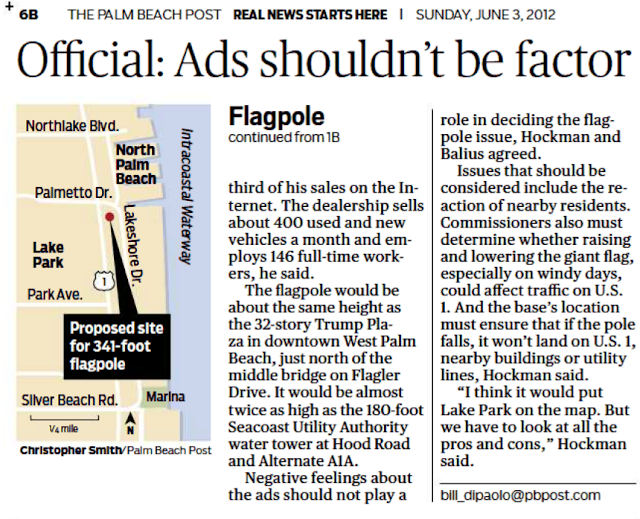 LAKE PARK — Earl Stewart wants to put up a 341-foot flagpole - almost five times as tall as Donald Trump's 70-footer at Mar-a-Lago - at his Toyota dealership on U.S. 1.
"Yes, it's self-serving. I'm 71 years old. I want to build something that will be around for a long time," Stewart said.
The steel pole would be about 5 feet in diameter at the base and would cost about $800,000. The flag, 50 feet by 30 feet, would be about twice as large as Trump's. It would be dedicated to 9/ 11 victims, Stewart said.
The pole must be built to withstand hurricane-force winds. Approval from the Federal Aviation Administration is required. The proposal is scheduled to go before the town commission for approval at 6:30 p.m. Wednesday .
Stewart could face resentment from town officials and residents about his dealership advertisements. In television commercials and print ads, Stewart states his red-and-white dealership is in North Palm Beach. In fact, the dealership is in Lake Park.
"That's upsetting to me. He should be proud to be in Lake Park," said Lake Park Commissioner Steve Hockman.
The ads anger many residents, said Chuck Balius, who served 12 years on the commission before retiring in 2008.
"People would stand up and boo (Stewart) when he stood up to speak at commission meetings. A lot of people complain about it," Balius said.
Stewart said he uses the North Palm Beach address so potential customers will know where his dealership is.
"When people hear Palm Beach, they know where it is. Many do not know where Lake Park is. It's good marketing sense," Stewart said.
He said he does about one-third of his sales on the Internet. The dealership sells about 400 used and new vehicles a month and employs 146 full-time workers, he said.
The flagpole would be about the same height as the 32-story Trump Plaza in downtown West Palm Beach, just north of the middle bridge on Flagler Drive. It would be almost twice as high as the 180-foot Seacoast Utility Authority water tower at Hood Road and Alternate A1A.
Negative feelings about the ads should not play a role in deciding the flagpole issue, Hockman and Balius agreed.
Issues that should be considered include the reaction of nearby residents. Commissioners also must determine whether raising and lowering the giant flag, especially on windy days, could affect traffic on U.S. 1. And the base's location must ensure that if the pole falls, it won't land on U.S. 1, nearby buildings or utility lines, Hockman said.
"I think it would put Lake Park on the map. But we have to look at all the pros and cons," Hockman said.
bill_dipaolo@pbpost.com