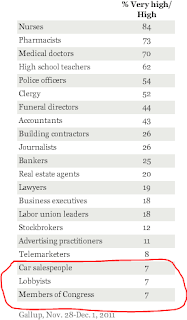 In recent surveys, car dealers have accomplished the perfect storm of fear, distrust, and vilification by the public. The most recent Gallup poll for the “Most and Least Respected Professions” listed car sales people tied for dead last with Congressmen and Lobbyists. In a recent poll by the American Consumer’s Federation, car sales and service received more complaints than any other business. And, lastly, in a recent survey by True Car, Florida car dealers had a higher average dealer fee ($610) than any other state in the USA.

You would think that there would be some local attention paid to this by the media and the regulators. The national media reports these stories and the local media will sometimes report the national story but never do they relate it to local car dealers. National regulators like the Federal Trade Commission are highly critical of dealers unfair and deceptive trade practices. The FTC has formed an “Auto Dealer Task Force” and are holding meeting all around the USA for input from consumers and consumer advocates about ways car dealers are preying on their customers. But have you heard about any serious effort by the Florida Attorney General’s Office or any other state or local regulators to stop car dealers’ blatant deceptive and illegal advertising and sales practices?
The TV and radio stations and the newspapers depend on car dealer advertising for economic survival. Each type of media, TV, radio, and print compete with each other for car dealers’ business. If a newspaper writes an unfavorable article about a local car dealer, he simply pulls his advertising from that newspaper and moves it to TV and/or radio. If a broadcast TV channel exposes a local car dealer, he moves his ads to another TV channel or medium. Money talks.

The Attorney General is an elected office and all of the other state regulators are either elected politicians or appointed by politicians. Florida politicians fear the powerful car dealer lobbies in Tallahassee. The most powerful lobby is the Florida Automobile Dealers Association, FADA, and there are other lobbying car dealer associations in Tampa, South Florida, and Jacksonville. A long time ago I was a director for the FADA and for the South Florida Auto Dealers Association, SFADA.  In fact, I even served on the executive committee of the FADA. This is when I became aware of how much money and influence we car dealers had through our associations. Car dealer associations contribute huge sums of money to candidates of both parties. They don’t care which side of the aisle he’s on or what political philosophy a candidate has; they care only if that candidate will “play ball” when it comes to not voting for regulating car dealers.

The power of the car dealer lobby was fully understood by me four years ago when I attempted to get a bill through the Florida legislature to outlaw the dealer fee. I flew to Tallahassee and testified before the state senate commerce committee. The FADA testified at that same hearing defending the dealer fee. The bill never even got out of the committee much less get a house sponsor. When I returned home and spoke “off the record” with some local state legislators, I was told why I didn’t “have a snowball’s chance” of getting the dealer fee made illegal in Florida. The legislators I spoke to agreed with me that the dealer fee was a bad thing for the consumer but they also said it would be politically impossible for them to publically take that position. Offending the powerful car dealer lobbyists would jeopardize their reelection. An analogous situation is playing out now with respect to gun control. The national news recently reported several terrible incidents of mass killing by deranged killers who legally obtained their guns. You would think that some politicians would have rushed to introduce more gun control regulation or better enforcement of the current regulation.  Have you noticed that democrats, republicans, and independents have done or said nothing? The reason is the National Rifle Association, NRA, the most powerful lobbying association anywhere.
I wish I had an answer to this dilemma. Our political system leaves a lot to be desired but it’s still the best on the planet. It hasn’t really changed that much over the years. Politicians’ #1 and #2 priorities have always been to get elected and reelected. Our founding fathers foresaw this problem and that’s why they provided for freedom of the press in the First Amendment. The news media is often referred to as the “Fourth Estate”, meaning the fourth branch of our government next to the Executive, Legislative, and Judicial. The news media’s job is to keep the other three branches, especially the legislative, honest. Our founding fathers might not have foreseen what impact the greatest recession in our history might have on the news media. Survival is a primal instinct and it can trump ideals like courage and integrity. If a journalist loses his job today, he might have a very hard time finding another. The watchdogs that our founding fathers created to keep our politicians honest are too afraid to growl for fear the VP of advertising might not like it.

www.earlstewarttoyota.com
Posted by Earl Stewart at 11:42 AM