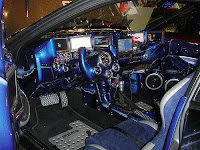 Ford Motor Company just announced that they are going back to “buttons and knobs” instead of their high tech touch-screen and voice recognition multimedia systems in their cars. They made this decision because of too many complaints, although, they said that the features were a motivation for customers to buy the car in the first place. This means that the high tech gadgets seemed like a great idea until you tried to use them while driving. They were too complicated, sometimes didn’t function the way the driver expected, and required too much focus which detracted from keeping their eyes on the road.


In case you haven’t noticed, technical advancements in cars are progressing at warp speed. We have far more computer power in a car today than in the rocket that took the first to the moon. Most of this is hidden under the hood and requires very little driver knowledge or participation. But car manufacturers have also started loading up the “cockpit” with high tech gadgetry like multimedia equipped with Bluetooth, touch-screens, and voice recognition. Your smart phone is automatically connected to your multimedia system when you start your car. Some cars have “micro radar” that detects cars approaching alongside in your blind spots or coming toward you as you back out of your parking spot. There’s even a camera mounted on the front of some cars that will tell you when you begin to move out of your lane and actually correct the steering wheel if you don’t hear the audio warning. This camera will sound a warning and automatically apply the brakes if you approach an object too fast.


To qualify for a driver’s license today, you have to learn all of the traffic rules and prove that you can drive a car on the road and park it. The driver’s test today is no different than it was 50 years ago when cars were far simpler to operate. Fifty years ago cars didn’t have cruise controls, navigation systems, front and rear video cameras, radar, Bluetooth, touch-screens, multiple warning lights and sounds, integration with smartphones, automatic braking and ability to keep the car tracking between the two white lines in the road.


Where we find ourselves today is on the verge of a driverless car. In fact, driverless cars are allowed on the road today and legal in several states including Florida.  Five or ten years from now when driverless cars become a reality, there will be virtually no accidents on the road. Computers are far smarter and coordinated than we and, even taking into consideration the occasional computer failure, they are safer. Computers don’t ever lose their focus. They don’t get mad at other drivers, look at pretty girls on the side of the road, drink too much, or fall asleep at the wheel. Car insurance premiums will go down drastically when driverless cars become a standard.


Until all the complicated high tech gadgetry on today’s car is completely taken over by the computer, we need to think about being sure humans are capable of safely focusing on their driving while they operate their navigation systems, touch-screens, Bluetooth, and multimedia sound systems integrated with their smart phone. Car buyers should be thoroughly trained on the operation on all of the high tech gear on their cars. They should be tested on its operation while demonstrating that they can drive safely at the same time they are operating it. A human being cannot focus on driving safely at the same time they are trying to figure out how to disconnect their iPhone from their Bluetooth when a call comes in that they want to keep private. It can be distracting just to change the station on a radio that has satellite, AM, FM, and interfaces with your smartphone. A driver should be so well trained that it’s almost reflex with no conscious thought required.


When I’m using my navigation system, guided by the woman’s voice,  and I reach the point where I know the rest of the way and don’t require guidance, I can never remember how to “make her stop talking”. I get irritated with her reminding me to turn at the next intersection when I already know to do so, but I can’t remember the procedure to mute her out. I take my eyes off the road while I try to figure it out. I know I should pull over to the side to do this, but if it’s rush hour on I-95 this can also be dangerous.


When a person takes a driver’s test, he or she should have to prove that they can easily and quickly operate the cars’ high tech accessories while safely driving. When a person buys a car with new gadgetry, the dealer should be required to train that buyer in the fast, efficient operation of all accessories and the buyer should complete a test to demonstrate that they did in fact learn what was taught. If the test wasn’t passed, the particular accessories that the buyer couldn’t demonstrate competence in would be disabled until that time that they can demonstrate proficiency.


Currently, all a car salesman does for a new buyer is give her or him an owner’s manual which nobody reads. Even if a buyer was inclined to study the owner’s manual, they are way too lengthy and written in a boring,  non-user friendly style. The navigation systems are so complex that they have their own owner’s manual at least a couple of inches thick.