Open Letter to the Owners of SeaView Radio: Please Bring Back Earl Stewart on Cars 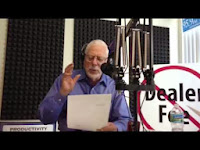 As you know, on October 22, Chet Tart, General Manager of WSVU (SeaView) radio in North Palm Beach/Palm Beach Gardens visited me in my office and told me that you had ordered him to cancel “Earl Stewart on Cars” which had been airing on SeaView Radio for about seven  years.

Every Saturday morning Nancy and I gave advice to huge number the car owners of South Florida who called our show for advice. Nancy focused on giving advice to women who have become a powerful economic force in car buying, leasing and servicing but who are treated by car dealers with less respect than men. We were unique in that we “told it like it is”, naming car dealers who wronged car buyers. Our show, Earl Stewart on Cars, provided a community service to the south Florida area and was, in many people’s opinion, the most important show on SeaView.

As you know, in all the years that we were on the air, neither SeaView nor Nancy and I were sued by any car dealer for what we said to our audience. This indisputable fact speaks volumes. Any lawyer will tell you that the truth is the perfect defense against libel and slander. Every week, we implored car dealers and employees of car dealerships to call into our show and have their fair say. I promised to allow them to speak as long as they wished and encouraged then to tell me if I said anything that was untrue. Only a very few dared call to criticize us but a few car dealers did call to compliment us. I always said that there are honest, ethical car dealers, albeit too few. I kept a list of recommended car dealers and a list of those I don’t recommend. I used the information from my weekly shopping report to decide.

Through Chet Tart and your advertising salesmen, you have been threatened often over the years by car dealers. They called Chet Tart and they told your advertising salesmen that they would either cancel their advertising unless you got rid of Earl Stewart on Cars, or that they would never advertise unless you did so. Chet would tell Nancy and me about these threats, but he also always told us that he supported and defended us and that he thought that our show was an asset to SeaView and to our community. He bragged about our very strong ratings; sometimes we were actually the #1 radio show in the South Florida market for our time slot and demographic. We were almost always in the Top Ten. Advertisers clamored to be on our show because of its strong ratings.

Although we paid for separate advertisements on SeaView, we never paid for our show, “Earl Stewart on Cars”. I told Chet, that we did not want our show to have the stigma of an infomercial. All of the other talk shows on SeaView either pay for their air time or are responsible for bringing in advertisers. We did neither. Chet even agreed to pay us a token amount for the show, even if it was only $1.

Jim, you’ve been in the broadcasting business a long time, just like I’ve been in the car business a very long time. We’re about the same age. I’m not saying that older business owners are always smarter than the younger ones, but I honestly believe that oftentimes we are wiser. Wisdom comes with experience and we’ve both had a lot of that. One thing that experience has taught me is that when I make a mistake, I shouldn’t be afraid to admit it. I found that is not only better for my business but better for my brand image because it earns the respect of my employees and my customers.

I sincerely and respectfully believe that you made a mistake in canceling our show. I’m basing my opinion, not on the fact that I believe it was ethically wrong although I do, but because it is economically wrong. It would be easy for me to say that you should reinstate our show because our show was a strong benefit to the community and you should not cave in to threats by car dealers who are a problem for the community. But, I’ve owned and operated businesses for 46 years and there are times when you have to put survival first and principle second. This is probably one of those times for SeaView. I’m well aware that SeaView is struggling financially and you owe its survival, not just to yourself but the other stockholders and SeaView’s employees and their families. I’ve experienced similar situations with companies I’ve owned and operated. Survival trumps principle.

This is why I’m asking you to consider that cancelling our show is a bad economic decision for SeaView for the following reasons: (1) Earl Stewart on Cars had a lot of listeners and our audience was growing regularly. Chet, Nancy and I discussed syndication of the show on several occasions and most recently we discussed expanding the show to two hours from one. (2) The public and especially our listeners don’t like what you did to Nancy and me. Since I’ve gone public with our being “fired”, the response has been huge and totally in our support. They don’t understand that you feel you had to do this and, let’s face it, some in your organization don’t understand it either (although they are afraid to say so). This negative PR is very bad for business. (3) Most South Florida Car dealers don’t like me. It’s a distinct possibility that most of them who told Chet Tart or your salesmen “Fire Earl Stewart and I’ll advertise on your station” were lying to you. They may have been telling you this just to get back at me. It will be interesting to see how many car dealers Chet and your sales force are able sign up now that I’m gone. Wouldn’t it be tragic if you lost your best talk show and didn’t get any advertising from those dealers who told you they would come back!  Clearly, the best management decision for SeaView in the long run, is to reinstate “Earl Stewart on Cars”.

You’ve already received a letter from my attorneys telling you that if you don’t bring back my show, I “will be left with no choice but to pursue whatever legal remedies are available to me.” Believe me, Jim, when I tell you that nobody hates litigation and lawyers more than Nancy and me. Litigation is always a last resort with me. If this was just about SeaView and Earl and Nancy, we would have just shaken off the hurt and surprise and walked away. But it’s about tens of thousands of loyal “Earl Stewart on Cars” listeners who rely on our show every week for advice on “how not to get ripped off by unethical and dishonest car dealers”. We can’t let them down and we won’t.

Please call me so that we can meet personally and privately to resolve this…just you, Tricia, Nancy and me.  My office number is 561 844-3461 and my cell phone number is 561 358-1474. We’ll all apologize to each other and work together to make SeaView Radio one of the leading radio stations in the market.