Does the Internet Threaten The First Amendment? 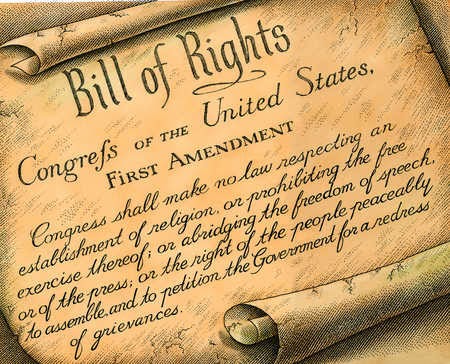 A few years ago, my wife, Nancy, and I were fortunate enough to have lunch with one of the greatest living journalists, Bob Woodward of the Washington Post and Watergate fame.  He asked us what we considered “the greatest current threat to our American society”. This was shortly after 9-11 and we answered international terrorism. He disagreed and said that his biggest fear was that “the media is failing to fulfill its vital role to report all of the news fearlessly, completely, honestly, and ethically.” Bob Woodward told us he could see signs of this today, and that was back in 2009. He alluded to the economic pressures on the conventional media which allowed outside “forces”, like advertisers, to exercise influence that in previous times was ignored. The Internet is radically changing the way we get our information, news and opinion and this has taken away readers, viewers, and listeners from newspapers, TV, and radio. Of course this has resulted in fewer advertisers and plunging revenues, especially for newspapers and radio.

A few weeks ago, I wrote a letter to the Editorial Page Editor of the Palm Beach Post, Rick Christie. In the letter I complimented him on his Sunday editorial criticizing gas stations for posting gasoline prices that included a five cent discount, but only for those who paid cash. This deception caused buyers of gasoline to come in and buy gas only to discover that they had to pay an extra nickel a gallon if they paid with their credit card, which most of us do. I also included in my letter a request that he write another editorial or ask one of his investigative reporters to expose a similar pricing deception propagated by car dealers. That is the common practice of advertising car prices in newspapers and on radio and TV excluding a large portion of the price, commonly referred to as the DEALER FEE.  I told Rick Christie that I would like to meet with him and explain in detail this chronic problem with virtually all South Florida car dealers.

I was pleasantly surprised when I received an email from Rick Christie. He told me that he would be sure to pass along my story suggestion to Joel Engelhardt, the PB Post’s investigative Editor. He also commented, “As you know, we have a well-established policy of keeping our advertising and news operations separate.”  This comment was in response to my letter to the Editor in which I stated, “Why  is there no hue and cry about dealer fees ripping off car buyers for thousands of dollars like there is for gas station operators ripping off gas buyers for much less? I have a theory that the local media is afraid to spotlight dealer fees because car dealers represent such a large percentage of their advertising revenue.”

Rick Christie said he would meet with me “for a cup of coffee”. We agreed on Starbucks at CityPlace and we did meet there last Friday morning. It was a very surprising and pleasant meeting. I’d never met Rick before and was very impressed. Not only is he very knowledgeable and intelligent (as you would expect the editorial Editor of the Palm Beach Post to be, but he was a very nice guy who you couldn’t help but like very much. The “surprising” part of our encounter was the fact that he was totally honest and candid with me about why my letter to the editor will not be published, why no PB Post reporter will ever write a story about it, and why he will never write an editorial about it. The surprise was not that he refused to write about what I’d written in my letter to the Editor, but that he was so truthful about the reason.

In the briefcase that I brought to our meeting at Starbucks, I had several copies of car dealers’ advertisements from the PB Post in the previous Saturday’s edition as well as about a dozen consumer complaints submitted to the Florida Attorney General’s Office on local car dealers who had violated Florida’s law against deceptive and unfair trade practices. I also brought copies of the Florida statute requiring that the dealer fee be included in all advertised prices and the Federal Trade Commission law against fine print contradicting the understanding of the advertisement. We discussed all of this and, in my opinion, Rick Christie fully understood and agreed that that the allegations in my letter to the Editor were accurate and truthful.

Rick explained to me that he could not print negative stories about car dealers who advertised in the PB Post because they would stop advertising in his paper. This was in stark contradiction to what he had written in his email, “We have a well-established policy of keeping our advertising and news operations separate. I can only assume that he believed this when he wrote it, but his mind was changed by his boss, Tim Burke, the Publisher and Executive Editor of the PB Post. Why else would he write one thing in an email and a short time later contradict it in a face to face meeting? Earlier in our conversation at this meeting he said that he believed in printing virtually every kind of opinion in letters to the Editor. He said the only exceptions were those that were profane, obscene, or mean and hateful. He said that since he had been Editorial Page Editor at the PB Post, Tim Burke had asked him not to print only two letters to the Editor. I asked him why mine had not been printed, and he just gave me a knowing smile which I fully understood. Mine was one of those two.

It may surprise you to hear that I completely understand and “almost” agree with the decision by the PB Post not to print the truth about car dealers’ illegal advertising. The PB Post does a lot of good in our community and employs a lot of people. If the car dealers stopped advertising, they might go out of business and we would have no newspaper and hundreds of people would lose their jobs. Self-preservation is our strongest instinct. If I was Tim Burke and the decision was mine, what would I do? What would you do?

I don’t have a solution to this problem which is not confined to the PB Post. You read, see, and hear a lot of stories about businesses and individuals that defraud the public. Local TV, radio, and the newspapers are full of these investigative exposés. When was the last one you saw about a local car dealer or, for that matter, any other large advertiser on that TV or radio station or newspaper?
I don’t think the answer is government subsidy of the media as in PBS, the Public Broadcasting System, because then we are inviting government control. We could ask private enterprise to subsidize the media but then you have control by corporations. Maybe the thing that caused the problem may also be the cure…the Internet. Will truth in journalism prevail with Internet news and social media? Only time will tell.