Subject: We Have Met the Enemy & He is Us! 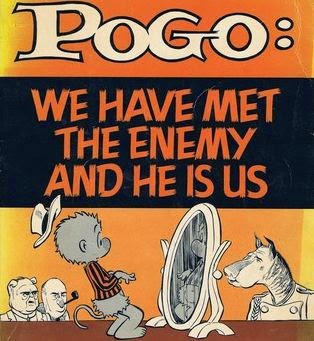 Dear Florida car dealer, even if you weren’t a good history student in school, you probably remember the quote from Commodore Perry from the War of 1812, “We have met the enemy and they are ours”. The satirical comic strip, Pogo, has a memorable quote satirizing Commodore Perry, “We have met the enemy and he is us”. This fits the image problem we car dealers have today. We brought it on ourselves through our devious advertising and sales practices. However, we blame everybody but us…our customers, lawyers, the media, and car dealers like me who dare to speak the truth.

This is the 3rd letter I have written to Florida car dealers in my weekly column. The first asked you to stop charging your “dealer fee” on top of the price you quote your customers. The second asked you to advertise cars at a price you were willing to sell the car for and have an ample supply of. In both letters I made the point that there is a minority of car dealers like me who do not charge dealer fees or resort to “bait and switch” ads. I also confessed that I used to be one of those dealers that I am writing about today. I did charge a dealer fee once and I did advertise cars that I hoped the customer would not buy.

At the end of each letter, I asked that you call or email me to discuss my letter. So far, I have received no phone calls and the only emails blame me and others like me, for the negative image that car dealers have in our society. Here is an example of the emails I have received from dealers:

“I read your sanctimonious babble in today’s paper and you are correct in assuming your comments will garner the attention of other dealers. It is comments like the ones you made that keep public opinion of our chosen profession in the doldrums. Like it or not we’re together in this battle and your “holier than thou” claim will only fuel the fire. Want to show the world your true compassion? Donate 20% or more of you net profit to charity then you’ll truly be the “great guy” you aspire to be.”

We can see this sort of “shoot the messenger” attitude with our politicians who blame the media for their negative image. It always amazes me to hear Republicans accuse the media of left wing bias and the Democrats blame the same media for a right wing bias. Sure there is bias in the media just like there is some bias in all of us. But, when your image in the eyes of the American public is as bad as that of politicians and car dealers, how can you not understand that there is a problem? The only profession I can think of that ranks as low in the public esteem is that of lawyers.

If you will call or email me to discuss my position in an open minded manner, I think you will be surprised and happy that you did. My business has grown steadily since I began to really understand that satisfying and respecting my customers was the most important single ingredient for my overall success. I’m certainly not making the claim that my way of doing business is the only path to success. I know a lot of car dealers who sell more cars and make more money than I do who do not take my approach with their customers. You can “fool some of the people all of the time”. However, that minority that can be fooled all of the time is shrinking daily as our customers become more educated and sophisticated. One day soon, there won’t be enough of them to go around and the majority of car buyers will be doing business with guys like me.