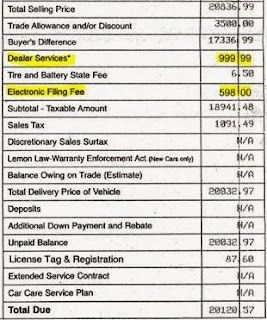 This increased profit to car dealers is generally called the “Electronic Filing Fee or E-Filing Fee”, but there are other names that dealers use, just as they do for the infamous “dealer fee” like “dealer services”. Car dealers used to process the tag and registration required on new and used cars themselves. About 7 years ago they began outsourcing this to companies that can do this work cheaper than they can themselves. The typical cost of this outside service is only $10 or $12. So, not only did the car dealers reduce their expense, they passed along the reduced expense to you, the car buyer! But wait, there’s more! Car dealers are also marking up this reduced expense and passing this along to you too! I’ve seen Electronic Filing Fees marked up to $598…that’s a 5,980% markup!
At my dealership I began using a registration service company named Title Tech in 2009 and they charge me $10 to prepare the tag, registration, and title work for each new customer. This saves me considerable time and money from doing it myself. In the past I always absorbed the higher expense and I don’t pass along the reduced cost to my customers either. It’s adding “insult to injury” to mark up this cost and pass it along to you.

The word “fee” is almost always used by dealers when they are trying to disguise additional profit or to pass along an expense to you (which is the same thing as additional profit). When car buyers are lucky enough to even notice the Electronic Filing Fee, they usually assume it’s a tax or fee charged by the state, federal, or local governments. They do the same thing with the dealer fee under its various other names like documentary fee.

Florida law considers the Electronic Filing Fee to be the same thing as a Dealer Fee and requires that it be disclosed and used by car dealers as such. The language Florida requires for disclosure is “This charge represents costs and profit to the dealer for items such as inspecting, cleaning, and adjusting vehicles and preparing documents related to the sale”. The law also requires that the Electronic Filing Fee be included in all advertised prices. Unfortunately most dealers are ignoring this law just as they do with the additional profit they make with the Dealer Fee.

Dealers almost never include their Dealer Fees or Electronic Filing Fees in their advertised price which is a flagrant violation of Florida law. If they even mention that they have a dealer fee, they will say in the fine print something like “prices plus tax, tag, and fees”. A few dealers will disclose in the fine print, “plus tax, tag, and $999.95 dealer fee”. The Florida Senate says “The law requires that the fee be included rather than “specifically delineated” in the advertised price.” Most car dealers’ advertising is done on TV and the fine print disclosure is literally unreadable.

The other loophole permitted by Florida law is to allow the dealers to offer only one car with the dealer fee included in the price. That would not be so bad if the dealer clearly communicated this to the buyer. But dealers use something I call “the old stock number trick”. Every car in a dealer’s inventory is assigned a stock number for accounting purposes. A typical stock number is something like “A25771”. Dealers will put their stock number for that particular advertised car in the fine print at the bottom of the ad or elsewhere. Even if a customer sees the stock number, they have no way of knowing what it means. When the prospective buyer responds to the advertisement, the salesman tells him that the advertised car was sold but, “not to worry”, he has several more “just like it”. Yes, he does have several more identical cars in terms of model, accessories, and MSRP. But, because they have different stock numbers, the law now permits him to add his extra profit to the advertised prices disguised as Dealer Fee and Electronic Filing Fee.

It’s an affront to the car buyers of Florida that their Attorney General and their legislature allow this to continue. Car dealers have powerful lobbying groups and they clearly communicate to Pam Bondi, the AG, and the legislature that they better not mess with their Dealer Fees and Electronic Filing Fees.

Another reason you don’t hear much about this atrocity on consumers is that the media has assumed their “Hear no evil, see no evil, speak no evil” stance. The TV, newspapers, and radio are deathly afraid of losing car dealers’ advertising. Car dealers are the largest local advertisers. Some of you may know that my wife, Nancy, and I were fired from our weekly consumer advice radio show on Seaview radio which we had done for almost 7 years (We’ve been back on the air for about a year on 900 AM, The Talk of the Palm Beaches). This was because of dealer threats to cancel their advertising. When I reported this attack on free speech to the Palm Beach Post, they refused to run the story or even allow me to purchase an advertisement that states the truth.

What can you and I do about this when we have such powerful institutions as the media, Attorney General, and Florida Legislature siding with the car dealers against you, the consumers? The answer is MAKE SOME NOISE! “We, the people” support, not only the media, but the politicians. Without our viewing, listening and readership the media can’t sell advertising and without our dollars and votes, politicians can’t get elected. Call, write, or email your local newspaper, radio and TV station, and local senator and representative. Tell them you’re tired of them kowtowing to the car dealers and the Florida Automobile Dealers Association. Demand that the laws on the Electronic Filing Fee and the Dealer Fee be enforced. Tell them “We’re mad as hell and we won’t put up with it anymore!”
Posted by Earl Stewart at 11:20 AM