Sales Commissions Are the Root of All Evil 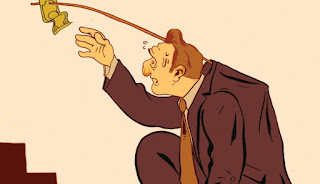 The Wells Fargo Bank has been in the news constantly for the past several weeks. It all started when the Los Angeles Times exposed the scandalous practice that millions of Wells Fargo customers were being signed up for credit cards and bank accounts without their permission or knowledge. When this went public, Wells Fargo fired 5,300 low level bank tellers, but no higher level executives were let go. One high level executive took “early retirement” and was given a huge, multimillion dollar severance package. The CEO just resigned after the heat from Congress got to high…some are calling for criminal charges.

The cause of this huge scandal was determined to be the pay plans of the low level employees whose job was to “sell” the credit cards and accounts that were being illegally placed in customers’ names without their knowledge. Management had set quotas on these so called “upsells” which a bank employee must meet if she wanted to keep her job. These quotas were very high (higher than most other banks). These low level employees had to make a choice between deceiving their customers or losing their jobs. This system worked very well for many years because Wells Fargo led the banking business in “upsells” by a wide margin.

Do you see where I’m going with this? The last time you bought a car the salesman that sold you that car was paid about 25% of the profit that the car dealership made. Almost every car dealership does not have a fixed price on the cars they sell. Virtually every car sold by most car dealerships has a different price and markup…even on identical year-make-models. Prices and markups depend entirely on the amount of profit the salesperson can negotiate with the buyer. These markups vary widely! The same car on the same day can be and are sold for prices and profits varying by thousands of dollars. It would not be unusual for a car to be sold for a $100 profit to one customer and a $5,000 profit to the next, on the same day! The first salesman would make only a $25 commission but he second one would make $1,250! As you would expect, the well informed, sophisticated buyer and negotiator pays much less for their cars than others.

So, we’ve established that, by design, car salesmen have an adversarial relationship with you, their customers. The customer wants to pay the lowest price for your car and they want you to pay the highest price. Now, I’ll explain why the salesman must charge you more money than you want to pay. If he does not make his profit quota, the car dealer will fire him. All car dealerships have quotas for their sales people and those sales people that fall short are fired. The turnover for car salesmen is the highest of any profession, averaging 66%! This means that two out of three sales people will be fired or quit within the year. The survivors are the those that produce the most profit for the car dealer.

Car dealers have a minimum acceptable average profit that they must make on their cars. The problem is that the sophisticated, educated buyers won’t pay this price. The “slack” must be made up for by overcharging the less informed buyers…typically the very young, very old, uneducated, and those who aren’t conversant in English. A car dealer or a car salesman might have a goal of making $2,000 average profit per car, but for every car he has to sell for a $100 profit, he must sell another for a $3,900 profit to meet his average.

What the owner and upper management of the car dealerships have created is a culture identical to what Wells Fargo created. They designed a pay plan pitting the goals of the customer against the goals of the sales people. Then they established unrealistically high quotas that necessitated the sales people do WHATEVER IT TAKES to meet those goals if they wanted to keep their jobs. One could argue that the sales people are guilty when they knowingly employ unethical and illegal sales tactics in order to make sales at higher prices than the customer would normally pay. On the other hand, let me pose this question to you. How far would you go to put food on the table for your family, make your car and mortgage payments, and provide medical care for your kids?

The upper management of Wells Fargo and the upper management of all car dealerships know, or should know, what their sales people are doing to their customers to meet their quotas. Warren Buffet is the largest stockholder of Wells Fargo Bank. He didn’t know what was going on, but he should have. This is what happens when you grow too big…you’re insulated from what’s going on “in the trenches”. Ironically, Warren Buffet just bought a chain of car dealerships whose salesmen are doing to their customers exactly what his Wells Fargo salesmen did to theirs. I admire and respect Warren Buffet very much, but I won’t excuse him for his fiduciary responsibility as an owner of a business to protect his customers.

Many owners and CEO’s of car dealerships today, like Mike Jackson (AutoNation) and Roger Penske (Penske Automotive Group) have the same problem as Warren Buffet. However, there are lots of other car dealer executives, below the owners level that are more likely guilty of, not only knowing about, but aiding and abetting these practices. They “don’t want to know” what’s really going on because this gives them “deniability”. These are the truly guilty ones and the ones that should be purged from the system.
Posted by Unknown at 10:41 AM