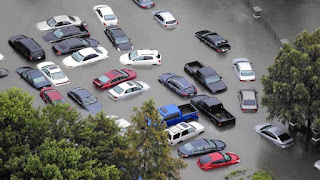 As I’m sure you know, the flooding from hurricane Harvey in Houston and surrounding areas was unprecedented and catastrophic; over 50 inches of rain fell which was the second highest on record in the USA (51 inches once fell Hawaii). About a MILLION cars were “destroyed”. Our most recent hurricane, Irma, caused very little flood damage compared to Harvey. When I say “destroyed”, you may envision a vehicle badly and visibly damaged, but most of these cars caught in the flood look good. Most of the damage and signs of damage are hidden. Many of these cars are brand new. The cars that you see in the aerial picture above are all “destroyed” or totaled by the insurance companies, but lots of them will end up on car dealers’ lots for sale…many in South Florida.
South Florida is a magnet for “problem” cars. Problem cars are those that aren’t supposed to be sold or that can be hard to sell. For example, cars missing airbags, cars with un-repaired dangerous recalls (Takata airbags), totaled cars that were rebuilt, cars with very high mileage that have had their odometers replaced with lower miles, and, of course flood cars.
The four main reasons that South Florida is so popular with crooked used car wholesalers are:
(1) It’s the second largest volume retail car market in the world, next to southern California.
(2) South Florida exports more new and used cars (mainly to Central and South America) than anyplace else. Other countries have very lacks safety regulations compared to the USA.
(3) More car dealers in South Florida rank below the already low average of honesty and ethics for car dealers (Google “Gallup Annual Poll for Honesty and Ethics in Professions”).
(4) Florida regulators and legislators are more lax than most other states in the enforcement of rules and laws controlling the bad behavior of car dealers.
Consumer Reports has an excellent article on spotting flood cars. These are the main signs of a car that has been in a flood:

How to Spot a Flood-Damaged Car
Water damage can be hard to detect, but Consumer Reports recommends that you look for some telltale signs:
·        Inspect the carpets to see if they show signs of having been waterlogged, such as smelling musty or having caked-on mud. Likewise, brand-new carpets in an older vehicle may be another red flag.
·        Check the seat-mounting screws to see if there is any evidence that they have been removed. To dry the carpets effectively, the seats must be removed and possibly even replaced.
·        Inspect the lights. Headlights and taillights are expensive to replace, and a visible water line may still show on the lens or reflector.
·        Inspect the difficult-to-clean places, such as gaps between panels in the trunk and under the hood. Waterborne mud and debris may still appear in these places.
·        Look for mud or debris on the bottom edges of brackets or panels, where it wouldn’t settle normally.
·        Search around the engine compartment. Water lines and debris can appear in hard-to-clean places, such as behind the engine.
·        Look at the heads of any unpainted, exposed screws under the dashboard. Unpainted metal in flood cars will show signs of rust.
·        Check to see if the rubber drain plugs under the car and on the bottom of doors look as if they have been removed recently. That may have been done to drain floodwater.
You should know, that the some of the crooks that sell these cars also read Consumer Reports and can successfully disguise many of the signs you read above. As with computer hackers and the anti-virus companies, there’s a seesaw battle staying ahead of each other. For this reason, I suggest that you insist on a CarFax or AutoCheck report and take the car you’re proposing to buy to a mechanic you can trust. For about $100 he can do a thorough check on your car…money well spent.
Another precaution you should take is simply don’t buy a car that was titled in the Texas flood area during the time of hurricane Harvey. However, remember that titles can be “washed” and this means some states will allow a new title to be issued on a car that erases all evidence of its previous history. The three worst states are Mississippi, New Jersey, and Pennsylvania. There is no national, federal title law; each state makes up its own. Fortunately for us, Florida has a rigid law, but that protects you only if the car was never titled out of state. If you buy a used car that was sold new in Florida and retitled for new owners only in Florida, you can be sure it wasn’t flood damaged anywhere else.
As if that’s not enough to worry about, remember that lots of Texans didn’t have flood insurance and never had their cars repaired even though they were partially submerged. It takes only about 18 inches of water to destroy the electronics in a car. Modern cars are “computers on wheels”. The car can function fine after its initial submersion for weeks and even months. Many of these uninsured cars were quickly traded in or sold outright by their owners. There is no official record on these cars. Your only hope is a thorough inspection by a trusted mechanic.
Posted by Earl Stewart at 11:25 AM