My Lunch with Bob Woodward 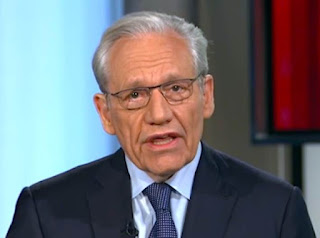 “Most Important Threat to the United States and the World”

I spent several hours with the renowned Washington Post reporter, Bob Woodward, a few years ago. My wife, Nancy, and I and six other Toyota dealers met at the “Newseum” in Washington D.C. and had lunch together at the Capital Grille next door. This once in a lifetime experience was my reward for being one of the top Toyota dealers in the USA, measured by sales and customer satisfaction.

You might be too young to remember the Watergate national scandal. Bob Woodward and another young reporter at the Washington Post, Carl Bernstein, were the reporters that broke the most important political story of the 20th century which led to the resignation of President Richard Nixon. Bob Woodward has written several books, won the Pulitzer prize, and is generally regarded as the #1 investigative reporter and political author in the world. Even if you were too young to remember that, you’ve recently heard of him with his latest book, Fear, Trump in the White House. I’ve downloaded and just begun to read it.

Now what on Earth can my conversations with Bob Woodward have to do with car dealerships? I’m glad you asked! As you know, I’ve been on a crusade for many years to make the dealer fee illegal in Florida. In addition to the dealer fee issue, I write a weekly newspaper column, a blog [www.EarlStewartOnCars.com], and host a weekly radio show [JVC radio WSVU; 95.9, 106.9 FM & 960 AM 8-10 AM EST Saturday] campaigning for truth, ethics, and legality in advertising and selling cars.

The main reason my message is so slow to reach the public is the refusal or reluctance of the great majority of the media to report the story. In fact, 2 years ago, I was previously on another radio station, Seaview 900 AM. The local car dealers threatened the station owner that they would stop advertising on 900 AM if they didn’t “fire Earl Stewart”. I was fired and off the air for over year until JVC Broadcasting bought Seaview and the new owners, Vic Canales and Matt Goldapper, hired me back. I salute and thank these gentlemen for their courage and journalistic ethics.

Why won’t many TV and radio stations and newspapers (fading from importance in the digital age) report rampant, unfair and deceptive selling and advertising practices by many car dealers in Florida? It’s all about the money. Car dealers are responsible for about 20% of total retail sales. As a group, they’re often the largest single buyer of advertising in the media. When the media runs a negative news or editorial piece about car dealers, they risk losing that advertising revenue. Newspapers are going out of business daily. Many of our largest newspapers, the NY Times for example, are teetering on bankruptcy and local newspapers (Palm Beach Post in my market) are even more severely affected.

During my lunch with Bob Woodward, he asked each of us what we considered the single most important threat to the United States and the world. My answer was “radicals inciting terrorism and the threat of a new world order”. Another Toyota dealer was afraid of “hyperinflation brought on by this Administration’s out of control spending”. After hearing all our greatest fears, Bob Woodward told us his greatest fear affecting the USA and the world. He fears that the media is failing to fulfill its vital role to report all the news fearlessly, completely, honestly, and ethically. We Americans take a lot of things for granted and I’m afraid that a free, open, and honest media keeping our government and corporations honest is one of them. Most of the world doesn’t have a free press and it’s no coincidence that those parts of the world without it also don’t have freedom.

Newspapers like the Hometown News, Florida Weekly and radio stations like WSVU should be admired and respected for having the journalistic ethics and courage to allow me to express my opinions about unfair and deceptive trade practices in the retail car business. My local newspaper, the Palm Beach Post, is not so inclined. For fear of losing the advertising business of local car dealers, they refuse to run any news or Op Ed article with my name in it. This is not just my “opinion”. PB Post reporters have said “off the record” that they cannot get permission from their editors to do stories about my company or me. I know one former PB Post reporter who quit his job for this very reason. When I finally realized that the PB Post had put a “black out” on any news about me or my company, I met personally with the former publisher, Doug Franklin at the time, and he privately confirmed that he could not risk losing car dealer advertisers by reporting my views or even running positive news articles about me. I do have to give him credit for being candid about this. He equates the financial survival of the Palm Beach Post with maintaining sufficient advertising revenue. Survival is our strongest instinct. It’s a very rare person or company that will put ethics ahead of survival. Would you? Ironically, the Palm Beach Post and most newspapers have lost car dealers and most other advertisers to digital and TV. “Selling out” their journalistic ethics didn’t work in the long run.

So, there you have it. What do you think is the greatest threat to the USA and the rest of the world? I’m inclined to agree with Bob Woodward. Who is going to keep our politicians, Wall Street, corporations [including car dealers] honest and ethical if they know that nobody will ever learn about their shenanigans in the media?
Posted by Earl Stewart at 11:29 AM