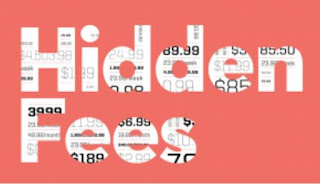 Shame on Florida’s regulators and legislators for aiding and abetting Unfair and Deceptive Trade Practices by 99.9% of all Florida car dealers. Almost every auto dealer in Florida adds hidden, extra charges to their advertised and quoted prices for autos and even service. The Attorney Generals have all “looked the other way” on this for many years. Our lawmakers in Tallahassee have done the same. Why? Without car dealers, their associations and Political Action Committee contributions, nobody can get elected to office in Florida or any other state.

Florida does have a law, ostensibly controlling “dealer fees”, but it may as well be not have such a law. It’s not enforced and, even if it was, it’s written with so many loopholes that smart dealers can technically comply and still deceive their customers. Because the law is never enforced, dealers generally ignore it. The law has been ignored for so long that, it may as well not exist. It’s very similar to the speed limit laws on most highways, especially I-95, Florida turnpike, and the Sawgrass Expressway. Every driver on these highways knows they can exceed the speed limit by 9 or 10 miles and mph with no chance of being stopped even faster with very little chance. Now, because every driver is speeding and practically no speeding tickets are issued, it’s actually dangerous not to speed.

The analogy to hidden fees by dealers is solid. It’s dangerous for a car dealer to not charge a dealer fee because all the competing dealers in his market do add hidden fees to their advertised and quoted prices. If he advertises a new Honda Accord for $1,000 more than his Honda dealer competitors, he has very little chance of selling the car. Honest, ethical car dealers are forced to “fight fire with fire”. I’ve had many car-dealer friends and associates over the year tell me, “Earl, I don’t like having to charge hidden fees, but, if I didn’t, I’d “go broke”! Car dealers profit margins as percent of sales is very slim, between 1% and 3%.

The average new car today sells for about $40,000. A 3% profit is only $1,200 and that’s the gross profit before expenses…commissions, advertising, and lots of other overheard expenses like rent, utilities, and insurance. The net profit on a new car is only $200 or $300. Because a dealer’s competitors are all advertising and quoting prices a $1000 or more below their cost, how can an honest dealer with no hidden fees to secretly raise the price survive?

The average hidden fees in South Florida are over $1,000. All dealers have several fees by different, official-sounding names, adding up to as much as $3,000. Some of the popular deceptive names are electronic filing fee, tag agency fee, doc fee, e-filing fee. Some dealers even double charge for the factory freight which is included in the price of all new cars.

Other dealers charge for “dealer prep”, purportedly to prepare the new car for delivery when they are generously reimbursed for this by their manufacturer. Incredibly, the Florida addressing dealer fees requires dealers to lie to their customers by “disclosing” their dealer fees by this verbiage…” This charge represents costs and profit to the dealer for items such as inspecting, cleaning, and adjusting vehicles,.”. Florida statute 501.976 (18) requires the dealer to tell you that they are charging you for performing the same work on your new car that they’ve ALREADY BEEN PAID FOR by their manufacturer.

This is not a re-run column. I’ve written many columns railing against the hidden dealer fees that are an out-of-control pandemic, especially in Florida. I won’t give up because I know that truth and justice will ultimately prevail. I know that consumers and voters are growing smarter at warp speed during this digital 21st Century. Consumers and voters will reach a breaking point, where they’ll no longer tolerate regulators and legislators who allow this unfair and deceptive affront to car buyers to exist any longer.