The Decline & Fall of the 20th Century Car Dealer 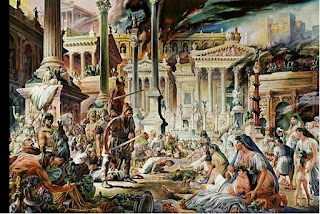 “You must understand the past; no empire lasts forever”
- Ray Dalio

This is a recent quote from an article in the Wall Street Journal, The New Sticker Shock. “Some auto makers, such as Honda and Toyota are pulling individual dealers aside to talk about their charging above MSRP. Jack Hollis, Toyota Motor of North America senior VP of auto operations, said the company has encouraged dealers to look at the bigger picture instead of trying to capitalize on the current market. He said to his dealers, “If you’re thinking about it in the short run, I think you’re mis-stepping. If that customer’s experience is great during this time, they’ll be with you.”  (emphasis mine)
The car dealer retail network came into existence more than a century ago, after Henry Ford created the Model A Ford, but, more importantly, assembly line production. At first the car dealerships were owned by Ford and other manufacturers, but to handle the huge demand for lower priced cars, manufacturers began to contract with independent businessmen to retail their cars. The contracts were called franchise agreements. The contracts were for short periods of time, one or two years. The manufacturers wrote the contracts so that they had total control over the franchised car dealer. A manufacturer could cancel the contract with his dealer for virtually any reason, which was typically because the dealer didn’t sell enough cars. The manufacturers could add as many dealerships as close to the existing dealers as they wanted, creating so much competition as to force some dealers out of business.
The dealers began to organize with local, state, and national associations. Collectively they were an economic force almost as strong as the manufacturers, but the strength and influence that the manufacturers hadn’t anticipated was their dealers’ power and influence in their local, and state governments.
Car dealers were, and are, wealthy individuals. Today, there are more than 17,000 car dealerships in the US. They employ well over a million people. With this local and state power, car dealers successfully lobbied their local, state, and the national governments to protect them against the predatory, unfair, actions of auto manufacturers. Over the last 100 years car dealers have gone from victims of the manufacturers’ every whim to virtually untouchable. Car dealers of almost every manufacturer have the exclusive right to sell the vehicles built by that manufacturer. Manufacturers are prohibited by law from selling directly to the consumer. Tesla is the rare exception due to its recent arrival with a totally different technology and total online sales. Car dealers are granted exclusive rights to large areas in their markets. The manufacturer is prohibited by state law from adding a dealership “too close” to an existing dealer. Also, the length of dealers’ franchise contracts is virtually “forever”. State laws prohibit manufacturers from terminating dealers’ franchise agreements except under the most extreme cases, like being convicted of a serious crime. Manufacturers are forced to treat their dealers as “independent businessmen” that can, pretty much, do whatever they like.
What no one anticipated until it was too late, is that these same state laws intended to protect car dealers from their manufacturers, now allow them to deceive their customers with impunity. Most states have insufficient state laws protecting the car buyers, and don’t enforce the ones that exist. This is because of the huge lobbying strength of car dealers because of their independent wealth, Political Action Committees, and Dealer Associations. The average car dealer employs about 70 people. In most communities they’re, collectively, the largest or one of the largest employers. Most of their employees are also voters.
Therefore, car dealers have been able to get away with the bad behavior that you probably have experienced most of the times you purchased a vehicle. The Gallup annual poll on Honesty and Ethics in Professions (Google it), has ranked car dealers last or next to last for the past 56 years! Car-retailing unfair and deceptive behavior has been frozen in time for a hundred years.
The “thaw” has begun. It began in 1983 with the birth of the Internet which triggered the knowledge explosion. In 2022 a consumer can find the answer to any question she has, like “what is the lowest price paid in the last 30 days for car I want to buy?” A car buyer can go online today and buy a car without ever entering a car dealership and can get out-the-door prices from as many car dealerships as she wants.
Manufacturers and the smarter car dealers are “seeing the handwriting on the wall”. The educated consumer is the car dealers’ worst nightmare. Legislators and regulators who are, more and more, being elected by the educated and demanding consumers of the 21st century are also beginning to get a little nervous. This is because the educated voter is the politician’s worst nightmare. The media and the manufacturers are slowly gaining the courage to speak out about the terrible way car dealers treat their customers.
I’m predicting that the current, unconscionable, out of control pricing of new cars precipitated by the pandemic induced high-demand/low-supply will be the “straw that breaks the back” of the antiquated car dealer franchise system’s immunity from regulation by the laws and their manufacturers.
Posted by Earl Stewart at 11:47 AM