Regular readers may wonder what newspaper ethics have to do with cars, which are what I write about. The answer is that car dealers are the biggest advertisers in most local newspapers. In fact, in the last ten or twenty years, they have grown to become the largest, maybe second to real estate. Without car dealers’ ads, most local newspapers could not exist. One notable exception is Hometown News which publishes this column weekly. The reason you don’t see more newspaper ads in Hometown News is because of my column and for this, I salute Steve Erlanger, the publisher. He has the courage and ethics to allow me to write the truth in spite of the fact that it costs him advertising revenue.

This is not the first fight I’ve had with the Palm Beach Post. I wrote “Journalistic Ethics in Car Advertising” for my blog and Hometown News two years ago. And I wrote “Never Having to Say you’re Sorry if you’re the Palm Beach Post” just a couple of months ago. I don’t know if feel more anger about the erosion of journalistic ethics in newspapers or more pity. Self Preservation is our strongest, most basic instinct. Advertising revenues are the lifeblood of newspapers and ad dollars have dried up to the point where most local daily newspapers are hanging by a thread. This newspaper ad revenue draught started with Television and the Internet was the coup de grace. If I and my family were starving and I had no other choice, I might resort to less than ethical means to provide us food.

However, it’s one thing to print unfair, deceptive and even illegal ads for car dealers in your newspaper because you rely on them for ad revenue. It’s an entirely different thing to attack the good, ethical, and honest sheriff of Palm Beach County and imply that he’s stealing money from the taxpayers to buy lunches for himself and political supporters.

Below you will see the headline from the Palm Beach Post of April 5, 2012. Below that is my letter to the editor which was published April 9, 2012. The highlighted parts are portions of my letter that the PB Post chose to redact.

The most important message I wanted to send with my letter is that it’s easy for the PB Post to attack a good man like Sheriff Ric Bradshaw. After all he’s a Republican and a public figure. Most of the Post’s readers will applaud this attack because they side with the PB Post politically and because they read only the headlines. Ric Bradshaw knows that a public figure has little chance of winning a libel suit against a newspaper and a lawsuit would just draw more attention to the accusations. That’s why you never see an attack like this on a large advertiser in their paper. A car dealer can fight back by, not only suing for libel, but stopping his advertising.

I wrote another blog article several years ago after having the honor and privilege to have lunch with Bob Woodward of the Washington Post and Watergate fame. The article is entitled, “A Conversation with Bob Woodward about Integrity in the Media”. Bob Woodward told me that he believed that the greatest threat to the future of the USA and the world was that “the media is failing to fulfill its vital role to report all of the news fearlessly, completely, honestly, and ethically”. 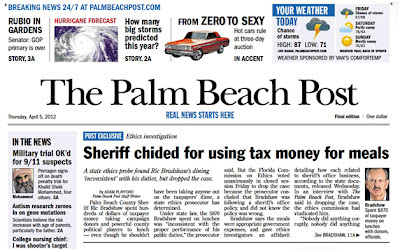 If the PB Post wants to express its opinion that Sheriff Ric Bradshaw is untrustworthy and not fit for his elected position, say it in your Opinion section, not a front page, headline news article as you did Thursday, April 5..."Post Exclusive"; Ethics Investigation; SHERIFF CHIDED FOR USING TAX MONEY FOR MEALS.
You covered yourself quite well for those few who read long newspaper articles completely to their conclusion. You ultimately disclosed that Sheriff Bradshaw had done absolutely nothing wrong! In fact, what he had done was commendable. So why is this headline on the front page?

The answer, of course, is that you know people scan newspapers and read headlines and it’s that first impression that gets your message across. Would the PB Post write a headline story, "TIM BURKE ACCUSED OF CHILD MOLESTATION”, if he was so accused by a disgruntled ex-employee (of which the PB Post has many)and there was no other evidence?

One last thing, what purpose did you have for digging up the fact that John Staluppi, who Sheriff Bradshaw took to lunch, "was 'accused' decades ago of mob ties"? John Staluppi is a very successful businessman and philanthropist who provides thousands of jobs and donates millions of dollars to worthy causes. Since when is being "accused" something to be ashamed of?


I'm beginning to believe that the only way a South Florida resident can protect her or himself from a character attack by the PB Post is to be a large advertiser. From the looks of your plummeting advertising revenues, this will soon leave most of us without protection.