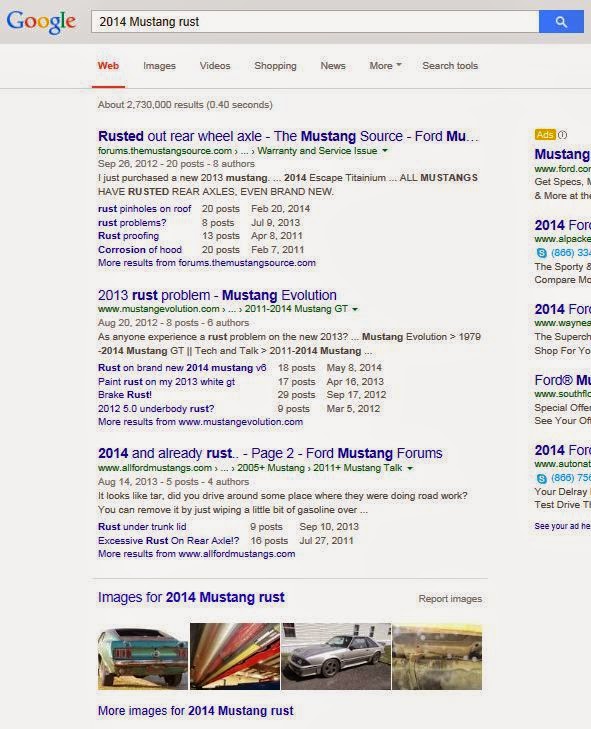 Most everyone has encountered a problem with their car that baffled the dealer’s service department or your own mechanic. One of the most frustrating things we encounter with car problems is being told “We are unable to reproduce or experience the problem you’ve described.” Another favorite of car dealers' service departments is “That condition is normal for this model car.” With the former, the implication is “you’re imagining this nonexistent problem.” With the latter, they are telling you that just because this manufacturer built a model that’s defective, you had better learn to live with it because they all are defective! In both of these situations, you are often told, we’ve had no complaints like this from anyone else.

Now, this is when you go to Google! If you are one of the few people who has refused to join the “cyber world” and are not computer savvy, just check with a younger friend, your children or grandchildren because they are. Type into Google, in your own words, what the condition is with your car and the exact year make and model. For example, “2014 Mustang rust”. The reason I chose this subject is that an owner of new Mustang called me last Saturday for advice on what do because is car was rusting badly and it had only about 800 miles on it. The dealer told him that all of them rust just like that and offered to paint over the rust. He Googled his problem and found out that lots of Mustang owners were complaining about the same thing. He has contacted Ford directly and they are calling him today about replacing his Mustang with another model that doesn’t rust.

The wonderful thing about the “social media revolution” on the Internet is that everybody now has an amazing and easy way to share their stories of happiness and woe. We can hop on Facebook, Twitter, Instagram, Myspace, or any of dozens of others. Google finds all of your comments and groups them together by subject. In my opinion Google should be recognized as one of the greatest inventions in the history of the World. It rivals the printing press, fire and splitting the atom. Google has become a part of our brains. Today, if you don’t have the answer to something, Google does because Google can instantly recall the answer to every question for which there is an answer. You can open Google on your smartphone and ask (voice recognition) or type, “How old is Brad Pitt or who won the Heat game last night?” But you can also find out if somebody else with a new Mustang is having rust problems.

I’ve written a column about TSB’s which are “Technical Service Bulletins” issued by auto manufacturers to their dealers. These are not made public and there are so many issued that too often, even the dealers don’t know about them. You probably have read the negative publicity about GM cars with the faulty ignition systems. There are millions of these on the roads and if you have too many keys hanging on your key chain, dangling from your ignition, the engine can turn off suddenly right in traffic! With no power, your airbag is deactivated. My point is that GM issued TSB’s on this issue years ago, but very few people outside of GM and some of their dealers knew about them. Why nobody, even GM engineers, understood that airbags won’t deploy with the car’s engine turned off, we may never understand. If more people had “Googled this like the NHTSA, it may have dawned on somebody sooner and a lot of lives might have been saved.

OK, let’s assume that you’ve just Googled your problem with your car that your dealer told you they had never heard of before. Or, they may have told you that they were unable to duplicate your problem (aka, you’re nuts!). And, of course, there’s the absurd explanation that that your car’s problem exists with all cars of that particular year-make-model and this somehow makes it OK. When you contact your mechanic or dealer service department you can show and tell them how many others have experienced the exact same problem with the exact same car you own. You may even be able to give them the number of the TSB that the manufacturer issued telling the dealer how to fix it. You might learn that the manufacturer has paid for these repairs out of warranty (called goodwill). Your chances of winning an argument with the mechanic or dealer are greatly increased and you may even be doing them a favor by telling them something they didn’t know.

If I was the director of the National Highway Traffic Safety Associations, I would have a “Google Division” that would tap all of the social media for comments, complaints, and suggestions from car owners about their cars.
Posted by Earl Stewart at 11:17 AM