You Get What You Pay For (Car Dealers & All Companies) 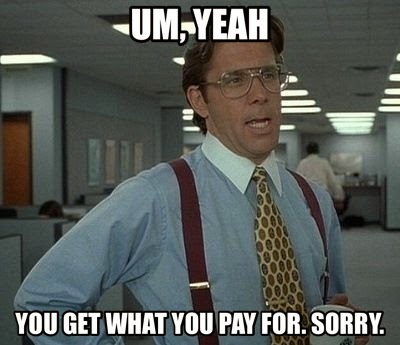 Virtually all companies, private and public, pay their employees in some form to motivate those employees to maximize the profits of the company. Obviously, all employees are not paid directly on commission in all companies. There are those that are paid set hourly, weekly, or monthly wage. But, indirectly, even those hourly and salaried employees’ compensation is correlated directly to profits. This is because the supervisors’ (the ones that that hire, fire, and set the pay level of hourly and salaried employees) compensation is tied to profits.

General Motors is in the news now and probably will be for quite some time. You can’t avoid the news story of GM’s massive recall of cars with defective ignition systems which deactivated airbags causing at least 15 deaths and thousands of injuries. The amazing thing about this terrible and seemingly obvious defect is that it existed for 11 years without anybody raising the safety issue. Investigations have shown that there were several GM employees that knew about the defect, including high level engineers. Fifteen employees have been terminated and the US Justice Department is conducting a criminal investigation. Logic defies one to believe that only 15 employees are guilty. I believe that hundreds knew about this problem.

“I listened to Mary Barra's address last Thursday and was struck by this thought. What if Mary Barra was a car dealer, not the CEO of GM, and she was giving this address to the employees of her dealership. Finally, what if the subject of her address was not "safety", but customer satisfaction? If you take the time to listen to this entire speech and mentally substitute "customer satisfaction" for safety, it sends a very important message that all car dealers should take to heart. Unfair and deceptive advertising and sales practices are as embedded in the culture of most car dealerships, as building unsafe cars was in GM.”

This posting let me to think about what caused this disaster at General Motors and is the subject of this column. The cause in just two words is “Pay Plans”. General Motors and all companies whose purpose is to make profits design their pay plans to maximize just one thing…profit. The cost of auto recalls is very high, in the millions and even billions of dollars. GM has just come out of bankruptcy and it’s not inconceivable that this series of recalls could put them right back into bankruptcy. It’s also not inconceivable that GM managers can end up in prison. As you know, the number one instinct of all animals, including humans, is survival. When a GM engineer or any employee thinks he or she may lose their job if they “blow the whistle” on something, they usually won’t. In fact, the higher-ups in the management ladder have a saying, “I don’t want to know about this”. When it “hits the fan,” upper management wants deniability.

There are few companies that have a higher percentage of commissioned employees than car dealers. You know that virtually all car sales people are on straight commission based on how big a profit they make when they sell you a car. But did you know that he mechanic that fixes your car is also paid on straight commission based on how much you are charged for maintenance or repairs? Of course the service advisor who greets you in the service drive and “advises” you on what you need to have done is also commissioned. The service manager, who is in charge the entire department, is also on commission. The same thing applies to all the other departments of a car dealership…the body shop, parts department, and the Finance department.

You should be beginning to understand that the only protection you have against being overcharged at a car dealership is the inherent moral integrity of the person you are dealing with and his supervisor. That car salesman’s livelihood depends on the size of his weekly or monthly paycheck. That paycheck depends on how big a profit he makes on each car he sells. He probably has a family to support and he has to put food on the table, make monthly mortgage payments, and provide healthcare for his family and an education for his kids. As I stated earlier, survival is our most basic instinct. Given all of this, what are your odds of getting the lowest price on that new or used car you’re trying to buy?

This same principal applies to the car dealer advertisements you see. Survival dictates that every car dealer outsells his competition; it’s what drives bait and switch sales tactics in which dealers try to get you to buy a higher priced car than the advertised car. A lot of these advertisements and sales practices are actually illegal. Oftentimes, the actual sales person doesn’t even know or understand this. The guilt usually lies with the managers who design the advertising and the sales systems. Just as in other companies, the higher up the management ladder you go, the “less anybody knows” about anything illegal or unethical. Usually the owner or General Manager has total “deniability” that he or she had any idea that anything wrong was going on. This is because they don’t want to know.

What can we do about this sad state of affairs? Please understand that I’m a businessman and my dealership makes a profit. I’m a capitalist and I believe making profits is a good thing. I only have a problem with this when making a profit is not in the best interest of our society and when ethics and morals are compromised to make it. Crime can be very profitable but nobody advocates crime except criminals. My solution to change the way businesses treat their customers is to introduce different pay plans than those prevalent today which reward on pure profit. Incentives should be based on employees’ actions that promote customers satisfaction, safety, quality, integrity, courtesy, and ethics. This won’t be easy because they’re not as easy to measure as profits. However, the beauty of this compensation plan will be having most of your employees working hard to accomplish these objectives. The profits will follow because customers will want to do business with your company.

Unfortunately, too many companies out there really don't get it and have pay plans that set up conflicts of interest between their employees and their customers. These conflicts of interest will always tempt employees to cross boundaries of honesty and ethics. So, when looking for companies to do business with, remember to consider attributes of integrity because you will typically get exactly what you paid for.
Posted by Earl Stewart at 12:08 PM