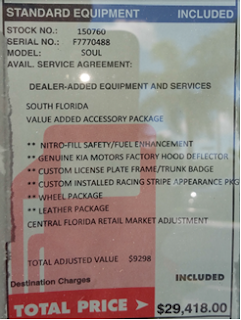 This blog/article is a rerun, but it’s important that I run it again because it involves a violation of a FEDERAL LAW…or at the very least its intent. The law is meant to inform car buyers of the official retail price suggested by the car manufacturer. The U.S. Senator who drafted this law, Mike Monroney, said this about his law: “The dealer who is honest about the so called ‘List Price’ cannot compete with the one who packs several hundred dollars extra into it so he can pretend to give you more on the trade-in.” Senator Monroney said this in 1958 and the only thing that has changed is that dishonest dealers are now charging several THOUSAND dollars extra. To add insult to injury, some remove both labels before delivery which is illegal.

The Monroney label is the window sticker that is mandated by federal law to be affixed to every new vehicle sold in the United States up until the time the new owner takes delivery. The name, Monroney, derives from Senator Michael Monroney’s law passed by Congress in 1958. Prior to the proposal of this bill, there was often a large discrepancy between the showroom price and the actual price of a new vehicle. The fact was that existing price tags did not tell the full story. Most customer-quoted prices were for "stripped-down" models and did not include additions for preparation charges, freight charges, federal, state, and local taxes, or optional factory-installed equipment requested by the purchaser. These hidden charges were used by some dealers to increase the selling price while giving the new vehicle buyer an inflated idea of their trade-in allowance. This price confusion led to a slump in auto sales during the early 1950's. Senator Monroney's bill was designed to prevent the abuse of the new vehicle list prices, but would not, however, prevent dealers and buyers from bargaining over vehicle prices.

Well, as you might expect, car dealers have figured out a way to evade this very good law. An alarmingly large number of dealers use a label that is designed to look almost identical to the official Monroney label. It has the same coloring, fonts, type size and layout. This “phony Monroney” is affixed right next to the genuine article. Unless you really look close and read all of the fine print, you will have no idea that you are looking at a counterfeit Monroney label. This phony Monroney includes extra charges to artificially inflate the manufacturer’s suggested list price, MSRP.

One of the most egregious of these charges is an addition of pure markup just for profit which has a variety of names. Some of these are “Market Adjustment”, “Additional Dealer Markup”, “Adjusted Market Value”, “ADM”, “Market Adjustment Addendum” and “Market Value Adjustment”. This is simply an amount that the dealer adds to the manufacturer’s suggested retail price. It is virtually always used in high-demand, low supply cars. I have seen these labels with charges as much as $10,000 added to the MSRP. Additions of $1,500 to $3,995 are common. Dealers also use the counterfeit labels to price dealer-installed accessories, which are OK, as long as the accessories are not marked up higher than the manufacturer marks them up.

When customers confuse the phony Monroney with the real one, this distorts their point of reference for comparing prices between different dealerships. One manufacturer’s Monroney labels are consistent. A 2016 Honda Accord with the same factory accessories will have the same MSRP at every Honda dealership you visit. But if dealers fool you into thinking their label is part of the Monroney, you are not comparing “apples and apples”. This can adversely affect a good buying decision in a number of ways. Some buyers focus mainly on how big a trade-in allowance they can get for their old car. If one dealer has the same car marked up $3,000 more than another dealer, he can offer you $3,000 more for your trade and still make the same profit as the other dealer. Some buyers focus on how big a discount they get from “sticker”. It’s easy to give a higher discount if you have artificially inflated the MSRP by thousands of dollars.

My advice to you is carefully inspect the sticker on the new car you are contemplating buying. Read it completely and especially the fine print. If there is a second label on the car, it is possible that it is fair. This would be for purposes of adding an item, installed by the dealer like floor mats or stripes, priced the same as the manufacturer charges. If that second label includes a markup over MSRP for no reason other than profit for the dealer, make sure that you adjust for that number in your comparisons for discounts and trade-in allowance. Some dealers also add a second markup to these labels and that is the infamous “dealer fee” also sometimes called “doc fee” and “dealer prep”. Some dealers do not put this on the phony Monroney but print it on their buyer’s orders and program it into their computers.
Posted by Unknown at 9:43 AM