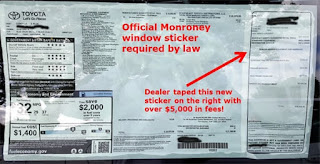 If you bought a new car recently, the probability is almost 100% that there were products and services added by the car dealer to the price you paid for the car. You may not even know that you paid extra for items like interior fabric protector, paint sealant, rental car assistance, roadside assistance, nitrogen in your tires, glass etching, pin stripes, and window tint. The one thing all these items have in common is that they’re over-priced. The markups on these products are much higher than any factory accessory installed by the manufacturer. Factory accessories like cruise controls, sunroofs, and navigation systems are marked up in the range of 15% to 25%. Dealer installed accessories are marked up 100% to 500% and higher.

Non factory installed accessories are also pre-installed by auto distributors. When cars first were retailed in the early 20th century, they were sold to the retail buyer through dealerships that were owned by the factories like GM, Chrysler, and Ford. This evolved as sales grew to factory owned distributors that distributed cars to independent dealers. When imported cars like Honda, Nissan (Datsun), Mazda, and Toyota became popular, they were mostly sold through independently owned distributorships that established networks of car dealers. Most of these distributorships have vanished and the manufacturers sell most of their car directly to independent car dealers. The largest and most notable exception is Southeast Toyota (SET) headquartered in South Florida. SET buys all their new Toyotas directly from Toyota and resells them to all the Toyota dealerships in Florida, Georgia, North Carolina, South Carolina, and Alabama.

Because Toyota is, by far, the best-selling vehicle in the Southeast USA, the impact of the non-factory, pre-installed package named “ToyoGuard” is worthy of mention. Most Toyota dealerships in the Southeast and nearly all in South Florida order most of its cars with this distributor installed accessory package. The platinum ToyoGuard package retail price is $699. The cost to the dealer (if he orders at least 75% of his vehicles so equipped) is only $225. That’s a 311% markup! I’m not sure what the actual cost to Southeast Toyota is, but it’s probably a lot less than $225. Included in this package are fabric protection, paint sealant, rental car assistance, roadside assistance, 2 oil changes, and 4 tire rotations. One can debate the value of this “$699” package, but the fact that the true cost to the dealer is only $225 and the true cost to SET is less than that is indisputable.

The fact that the true cost of ToyoGuard and all dealer installed accessories is a tiny fraction of the retail price is not the main reason I object to them. The main reason is that I believe the retail buyer of a new car is entitled to choose the accessories on the car she buys. Extra, over-priced accessories on an “addendum label” next to the factory window sticker are likely not something the buyer wants or, most likely, even knows about.

I fully support the right of car dealers and distributors to sell extra accessories to their customers. But the features, benefits, and value of these accessories should be presented first, and sold only if their customer agrees that they are a true value at the price charged. When a car dealer or distributor adds accessories to almost every car he sells before the retail customer has a chance to say “no”, it’s ethically and morally wrong.

To avoid being duped into buying something you didn’t want or know about, always ask the salesman this question. “Does the advertised price and the price you quoted me include any accessories that were not installed by the vehicle manufacturer?”
Posted by Earl Stewart at 11:10 AM