How Do You Learn the Dealer’s Cost on a Car? 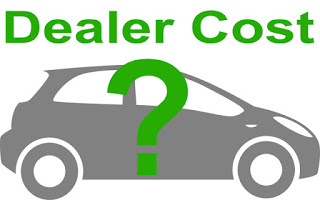 It’s almost impossible for you to determine the true cost of a new car. This might sound crazy, but many dealers don’t know the true cost of their cars. The manufacturers and distributors “invoice” their dealers for an amount when they ship them a car that is almost always several thousands of dollars more than the true cost. It’s fair to say that in virtually every case the “invoice” for a new car is much higher than the true cost. By true cost, I am referring to cost as defined by GAAP, generally accepted accounting principles.

You probably have heard the term, “holdback”. That is an amount of money added into the invoice of a car ranging from 1% to 3% of the MSRP which is kicked back to the dealer after he has paid the invoice. In some cases, there are two holdbacks…one from the manufacturer and one from a distributor. Some manufacturers include the cost of regional advertising in the invoice which offsets the dealer’s advertising costs. Another common charge included in invoices is “floor plan assistance”. This goes to offset the dealer’s cost of financing the new cars in his inventory. Another is “PDI” or pre-delivery inspection expense which reimburses the dealer for preparing the car for delivery to you. I could name several more, depending on the manufacturer or distributor. Some of these monies that are returned to the dealer are not shown as profit on dealers’ financial statement and some are. Technically a dealer could say that the cost he showed you reflected all the profit defined by his financial statement, but the fact remains that more money would come to back to him after he sold you the car. To me (and the IRS) that’s called profit.

Besides holdbacks and reimbursements for expenses, you must contend with customer and incentives or rebates (usually referred to as “customer cash” or “dealer cash”) when trying to figure out the cost of that new car. You may be aware of the customer incentives, but not the dealer incentives. Most dealers prefer and lobby the manufacturers for dealer rather than customer incentives just for that reason. Also, performance incentives are paid to dealers for selling a certain number of cars during a given time frame. These usually expire at the end of a month or a quarter, and are one reason why it really is smart to buy a new car on the last day of the month.

Last but not least, remember the hidden fees named whatever the dealer chooses… “dealer fee”, “dealer prep fee”, “doc fee”, “dealer inspection fee”, “electronic filing fee”, “e-filing fee”, “tag agency fee”, “taxable fees”, etc. which are added to the advertised price or the price you were quoted by the salesman.. They are printed on the buyer’s order and sometimes the worksheet and are lumped into the real fees such as state sales tax and tag and motor vehicle registration fees. Most dealers in Florida (it is capped or illegal in many states) charge these fees which range from $500 to $3,000. If you’re making your buying decision on your perceived cost of the car, even if you were right, here is up to $3,000 more in profit to the dealer.

Hopefully you can now understand why it is virtually impossible to precisely know the cost of the new car you are contemplating buying. Most often the salesman and sales manager are not completely versed on the cost either. Checking the cost on a good Internet site like www.kbb.com or www.edmunds.com is about the best you can do. Consumer Reports is another good source. One reason that Internet sites don’t always have the right invoice price is that different distributors for cars invoice their dealers at different prices.

Do not decide to buy a car because the dealer has agreed to sell it to you for “X dollars above his cost/invoice”. This statement is virtually meaningless. You are playing into the dealer’s hands when you offer to buy, or he offers to sell, his car at a certain amount above his cost. As I have advised you in an earlier column, you can only be assured of getting the best price by shopping several dealers for the exact same car and getting an “out the door” price plus tax and tag only,GOVERNMENT FEES.
Posted by Earl Stewart at 10:00 AM