Car Dealers are Angry at You... 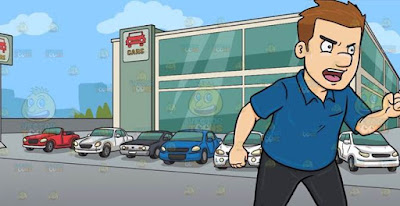 ...because you want to buy new cars for lower prices

I receive some of my most informative and interesting information via www.YourAnonymousFeedback.com. This is a special link offered by a company named, Incogneato. If you’re interested, you can buy an anonymous inbox at https://incognea.to. The feedback I get for my radio show, “Earl on Cars”, my blog www.EarlOnCars.com and even from the employees from my dealership is refreshingly honest, whether I always agree, or not. Of course, I do get some less than honest and even insulting feedback, but this is the price I gladly pay to hear unvarnished truth (as the sender sees it). If you truly want to hear what people think about you, allow them tell you “anonymously”.

Below is the dialog between someone I believe to be a car dealer and me. “Mr. P” sent me his opinions about new car prices through my anonymous feedback link, www.YourAnonymousFeedback.com. You can use the same link to voice your thoughts to me and I will never know your name.

“Don’t ostracize dealerships. Dealerships and people who run them have families and houses to support. They have to make a living, so give them a break.”

My goal is not to “ostracize” dealerships, but to make consumers aware of their deceptive tactics so they aren’t deceived, and hopefully to persuade dealerships to reform their tactics.


Mr. “P” (Anonymous Car Dealer):
The truth is dealers don’t make much or sometimes nothing on new cars as the markups are very small. If a dealer makes $800-$1,000 that’s wonderful-$150 goes to a salesman. So now you look at the dealership’s costs of bringing the car in, sitting on the lot, paying interest on it, and many others, and these profits don’t look all that amazing.

It’s true that many new car dealers don’t make big net profit (and some lose money) on the sale of new cars, but this is because their average gross profit per sales is lower than they would like. You’re incorrect that the mark-up on new cars is very small. The markup is whatever the customer will allow the dealer to charge. Smart negotiators get low markups, those not so savvy, pay a large markup. Buyers who can’t negotiate prices pay very high prices, often exorbitant. The reason average new car profits are getting lower is that car buyers are becoming more savvy regarding negotiating aware of deceptive advertising and sales tactics. Most new car dealerships do make good total profits. Most of them are doing this in their other departments, finance, service, used cars, parts, and collision repair. Even if the dealer didn’t make a good profit on the new car he just sold, he’ll make good profits providing financing, service, parts, collision repair and selling the used car that was traded in on the new one. In 2018, AutoNation’s 325 dealerships, largest new car retailer in America, made an average net profit after taxes of $1,218,462.54 per dealership. Many of AutoNation’s Lexus dealerships make over $1,000,000 monthly.

Dealers need to come up with alternatives to compensate, and make a bit of profit; otherwise, it would not be a CAR BUSINESS. It would be FREE cars. So, give them a break and stop complaining. You absolutely DO NOT need to deal with them. In fact, they are happy not to negotiate with problematic little whiners. As of me, I will always buy a new car and a new car only. I know where it came from. I know the price outright. I can maintain it as I please. It will run forever. Mr. P.

Car dealers pay almost every employee a commission on how much they sell. Salespeople and managers, service advisors, technicians, and all dealership management gets a percentage of the sales or profits they’re responsible for. I agree that this should be changed because commission, especially with no set prices, pits the salesperson against their customers. The higher the salesman raises the price of the car, the more money he makes. Car dealers should post their lowest price on every car, service, and part they sell. Those that sell the products should be compensated on how well they satisfy their customers and how many products or services they sell…not on how high their profit per transaction is.

The car dealer that sent his opinion probably isn’t a bad person. He’s part of a retail business and culture that’s unique. Car dealers have been around for over 100 years, and they’re operating today just like they did in the early 20th century. They sell every car for as much money as they can get away with. Rarely do any two buyers pay the same price. Car dealerships are protected by state laws that make them virtually immune to regulations by state and federal legislators and regulators. They’re also protected from the auto manufacturers. In Florida and many other states, car dealers openly break the law by their advertising and sales practices daily. They get away with it because the Attorney General and other regulators are reluctant to go after them due to auto dealers powerful political lobbying power.
Posted by Earl Stewart at 12:44 PM