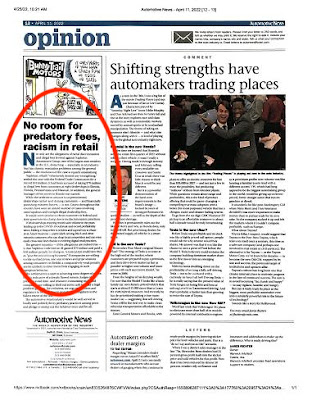 Dear Car Dealer:
We’ve all heard the popular legal expression “Buyer Beware” or “Caveat Emptor” in Latin. In the 21st century we’re seeing a renaissance of educated consumers, regulators, legislators, and media. Most of you know me, and most of you don’t like me. You’ve probably read articles about me in your weekly trade journal, Automotive News. One of my favorite articles was entitled, “Do-Gooder or Pariah” way back in October of 2008. This month, Automotive News’ featured Op-ed on the Opinion page was entitled NO ROOM FOR PREDATORY FEES, RACISM IN RETAIL. Virtually every auto manufacturer and car dealer in the World reads this weekly newspaper. The dirty little secret that the Gallup annual poll on Honesty and Ethics in Professions has been trying reveal for 45 years is finally being exposed by your very own trade journal. Car dealers have ranked last, or next to last, out of all businesses in this Gallup poll since 1977.
Just in the past month, two longtime and large dealer groups, Napleton and Koons have been charged and exposed by federal and state regulators. As I write this article, car dealers and auto manufacturers are making record profits by charging thousands of dollars more for each new and used car you sell. Selling cars for thousands of dollars above MSRP isn’t illegal, but it’s called the attention of the federal and state regulators, media and even some auto manufacturers about the things you’ve always been doing that are either illegal, unethical, or immoral.
In fairness, I must add that there are a few (very few) car dealers that do treat their customers with honesty and transparency. Many “want-to-be” be honest dealers feel as if they’re forced into lowering their standards to compete and survive. I hear, “If my competitors are advertising cars below the true price that they’ll sell them for, how much business will I attract if I don’t do the same?” These “want-to-be” honest dealers are almost as frustrated as I that our state regulators, legislators, and auto manufacturers won’t enforce the basic rules of honesty and ethics.
Well, Mr. Dealer, the “worm has turned”. The manufacturers are worried about their dealers’ terrible reputation with their customers. They also see the amazing success of Tesla, the only auto manufacturer that sells directly to their customers. Elon Musk was recently quoted as saying that, before he started Tesla, he had “never had a pleasant experience with an auto dealer.” Federal and state regulators are beginning to take notice and action, as you’ve seen with the charges against the very large Napleton and Koons dealer groups. Even the media is gathering the courage to speak out. TV, newspaper, and radio which were the dealers’ main choice for advertising are no longer. It’s mostly digital. Newspapers, radio, and TV stations no longer must fear being boycotted by dealers’ advertising when the media speaks honestly about their illegal, unethical, or immoral behavior.
It's a good time to change the way you’re doing business. You’re making higher profits than you’ve ever made. Charge as much as you want for a car, but don’t add hidden “junk fees” and worthless add-on, (dealer installed accessories). Give your customer the honest out-the-door price. Allow your customer to take your best price and shop and compare it with your competition. If you don’t do it now, you’ll never do it. If you don’t clean up your act, you’ll see the day that the dealer franchise system is replaced by the manufacturers selling directly to your customers, just like Tesla does.