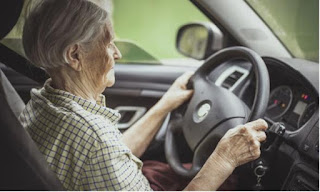 This column is a prequel to last week’s column, “Earl and Nancy Drive Autonomously”. If you missed last week’s column, you could read it atwww.EarlOnCars.com. I wrote this column fifteen years ago, just about the time I turned 67 and I began to think what my life would be like if I couldn’t drive a car anymore. If you're nearing retirement, you’ve probably had these thoughts; or, if your parents are elderly, you’re concerned about them driving. Today, almost miraculous technology has offered the real possibility of fully autonomous vehicles that may allow everyone, regardless of age or disability, to have personal transportation at their disposal.

Originally published Sunday, November 24th 2007:
You may have read in the newspaper a couple of weeks ago about a 94-year-old man who hit a woman riding a bicycle. It wasn’t the man’s fault; the woman, in her fifties, ran a stop sign. They put the old man in jail overnight and he was given probation because he was driving with no license. It had been taken away because he failed his driver’s test. He said he had to drive because he had to take his wife to the doctor and pick up medicine for her.

There is another reason that a lot of younger people don’t seem to understand why this old man still owned a car. If you are one of these people, think back to the first time you ever drove a car. Think back to the time you owned your first car. Can you recall that wonderful feeling of FREEDOM? No longer did Mom or Dad have to take you to school, to work, to the store, or to a friend’s house. Or, you didn’t have to take the bus, the street car, or impose on a friend who already owned a “freedom machine”. If you are a guy, do you remember how you felt when you first picked your girlfriend up at her home in your very own car? I don’t know about you, but I still feel a tingle when I think about it. I really can’t think of a more memorable experience in any young person’s life. Your first kiss is probably a close second [My first car was a 1951 Pontiac Chieftain & my first kiss was from Mary Ann Riggle during a “spin the bottle game”].

If you are one of those younger people who curse at that gray haired driver in front of you because she is driving too slowly, just remember that she is probably a safer driver than you. Newspapers like to feature stories of senior citizens having accidents and questioning their mental and physical faculties for driving but insurance companies charge senior citizens lower premiums than you. That means they have fewer accidents and cause fewer injuries. Admittedly that is partly because we seniors drive fewer miles but it’s also because most of us drive slower and more carefully than you.

My Uncle Charlie died eight years ago. He was 94. My Aunt Marion died within a year of Uncle Charlie. They lived in the same very modest, small house on Valencia Drive in West Palm Beach for fifty years. But they always owned a Cadillac and it was always parked outside in their driveway. Up until the time they were in their late eighties, the highlight of their week was to take a Sunday drive in their shiny Cadillac. Uncle Charlie always drove. When his eyesight got too bad to drive, he still kept that Cadillac in their driveway, always clean and shiny. His eyesight was still good enough so that, from his rocking chair in his living room, he could see that big Cadillac sitting outside (and so could his neighbors).

My father died when he was 86 and he drove a Pontiac TransAm up until the very last. He had cataracts removed from both eyes and back then, you had to wear “coke bottle” style glasses to see after this operation. He had no peripheral vision and there were a lot of scrapes, dings, and dents that appeared on both sides of that TransAm. Thank God he never had a serious accident. I saw Dad every day and I would see that the dents and scratches were regularly repaired. He always said he didn’t know where they came from and I never questioned him about that. Maybe I was wrong, but I didn’t have the heart to ask him not to drive anymore. I knew how important that car was to Dad and I knew how devastating it would be to him if he couldn’t drive anymore.

You may have heard of George Greenberg a. k. a. the “Mayor of Clematis”. He died a few months ago at the age of 91. He owned Pioneer Linens on Clematis Street in West Palm Beach, a store founded by his father, Max, in 1912. George and I were close friends and I delivered a eulogy at George’s funeral at the request of his grandson and daughter. George always drove an old Buick station wagon, although he was a wealthy man and could have bought any car he wanted. A couple of years ago, George finally treated himself to a new Mercedes Benz SLK-Class convertible! Boy did George look good in that car and he was always smiling when he drove it! When he was diagnosed with brain cancer and given only months to live, he finally had to stop driving his freedom machine. His grandson drove him to our monthly dinner at Carmine’s Ocean Grille and picked him up. It never was the same for George after that.

At my Toyota dealership in North Palm Beach, we have a lot of older customers. It’s just the demographics of northern Palm Beach County. My average customer is 55 and I have lots of customers in their seventies, eighties, and nineties. Maybe it’s because I’m a senior citizen too, but I especially like talking to my older customers and I’ve become personal friends with some. I can tell you from personal experience how important their cars are to them in their latter years. During your middle years when you have so much more going on in your life, your car becomes more utilitarian and you take it for granted. But when you retire and your life is not as hectic your car returns to the importance it had when you were sixteen…your “freedom machine”.

We recently leased a new Camry to one of our very good customers. This was the third car that she got from us over the last seven years and she had just turned 90. One of my managers, who has worked for me for 20 years and is a neighbor of hers, handled the lease. About a month after she took her new Camry home, her Grandson learned of the transaction and demanded that we rescind the lease. When we spoke to our customer, she let us know that her Grandson was very upset with her for leasing the car. He didn’t think she should be driving a car anymore and that she wouldn’t live long enough to make all the payments on a 4 year lease. We offered to refund all of the profit on the lease (about $850), but the Grandson insisted that we take the lease car back. This would cost my company thousands of dollars because of the depreciation a car takes on as soon as it is titled as a used car.

Yesterday afternoon my customer’s Grandson and Stepson visited me in my office. They continued to demand that I rescind the lease [Only the leasing company, Southeast Toyota Finance can rescind the lease] and absorb the thousands of dollars in depreciation on 1 month old used car. They suggested that I may have broken laws by exploiting the elderly and that if I did not succumb to their demands they would sue me. They had already called Toyota to complain about my actions. Not so politely, I asked them to leave my office.

This experience troubled me for the rest of the day and even last night and is what inspired this column. Now I understand why I was so angry at the actions of my customer’s Grandson and Stepson. They didn’t seem to understand how much that car meant to their Grandmother/Stepmother’s happiness and what an important thing her “freedom machine” was to her. I have to wonder how much of their ire was due to genuine concern for her or the potential financial impact on her estate. Her Grandson told me that she had put only 1,500 miles on her last car and what does she need a new car for? He just doesn’t get it! A new car is a lot more than just a way to get to the drug store. To a senior citizen it’s a source of pleasure, pride, and comfort, knowing that it’s in their driveway for everyone to see and it’s there if they need it.

One of my sons just called me to double check on the correct time for him to come over for Thanksgiving dinner today. I told him that I was writing this column and we discussed the subject. I also told him that I hoped that neither he, nor his two brothers would ever take away my “freedom machine”.
Posted by Earl Stewart at 11:31 AM