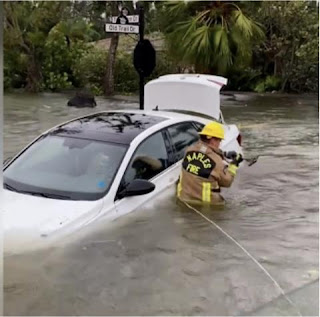 As I write this column, the terrible toll of human injuries, lives lost, and homes and vehicles damaged and destroyed by hurricane Ian are still being tabulated. It’s clear that Ian will go down in history as the costliest hurricane in Florida’s history.
We think of hurricanes’ danger as being mainly the high winds, up to 145 mph in Ian’s case. But the real culprit is the flooding. In Ian’s case, on the west coast of Florida, the storm surge raised the sea level high enough to put much of southwest Florida’s coastline underwater. Thousands and thousands of vehicles were immersed in varying depths of water for hours or days.
When an insurance company “total’s” a car because of flood damage, the car isn’t scraped; it’s sold by the insurance company for pennies on the dollar. Those who purchase these “totaled cars” resell them, usually to car dealers. Guess who the car dealers sell them to; they sell them to you if they can get away with it.
Even when there aren’t storms, hurricanes, or floods, cars are flooded, totaled, and resold every day. Heavy rains creating deep puddles and running off roads into canals happens often. It’s “buyer beware” anytime you buy a used car, but with hurricane Ian, the danger of buying a flood car has increased astronomically.
You’d think that consumers would be protected from accidentally buying a car that had been underwater and totaled by the insurance company, but that’s not so. All 50 states in the USA have varying rules on titling cars that have been damaged or flooded. The used car buyers and sellers of flood cars know which states they can get phony titles to hide the fact that the car they’re selling you was previously “underwater”. Flood cars bought in Florida can get “clean” titles in Mississippi, New Jersey, and other states.
As you probably know, since the advent of Covid, new and used car prices have soared. Just recently used car prices have begun to come down slightly, but hurricane Ian will certainly reverse that trend, at least in Florida and other states impacted by Ian. Regular readers of my column know that I advise not to buy a new or used cars at the present time unless you absolutely must. Sadly, many victims of Hurricane Ian will have to buy a car.
There’s a very good reason that insurance companies total flood cars. A car that has been in water as high as the dashboard is just as worthless as a car that’s been totaled in a head-on crash. The only difference is a crashed car is obvious and many can be repaired. A flood car can be made to look “as good as new” and is far from obviously being worthless. Today’s high-tech cars are particularly vulnerable to water permeation. All vehicles today are more computerized and electronic than they are mechanical. A modern car that’s been immersed in water for only a short time might run fine for a few months or longer, but eventually the water inside its computerized and electronic parts will fail.
The unscrupulous sellers of flood cars are masters of disguise. They can make a flood car look, smell, feel, and even drive (for a while) like a perfectly good car. In fact, one of the things an investigator of a possible flood car looks for is that the car is too nice and clean. The serious damage to a flood car, inside the computer and electronic modules, is completely invisible.
If you must buy a used car today, take it to a qualified auto technician that you can trust. Ask him how much he’ll charge to examine the car you’re thinking of buying and tell you whether the car has been underwater. A fair price for this is between $200 to $250 and will be the best $200-$250 you ever spent.
Posted by Earl Stewart at 10:53 AM